The problem of deforestation in Pakistan

If we want to see a future where forests are abundant, cooperation with not only international organization like the United Nations and WWF but also with regional authorities, and housing authorities like DHA is exceptionally essential, as they will help keep accurate checks and balances 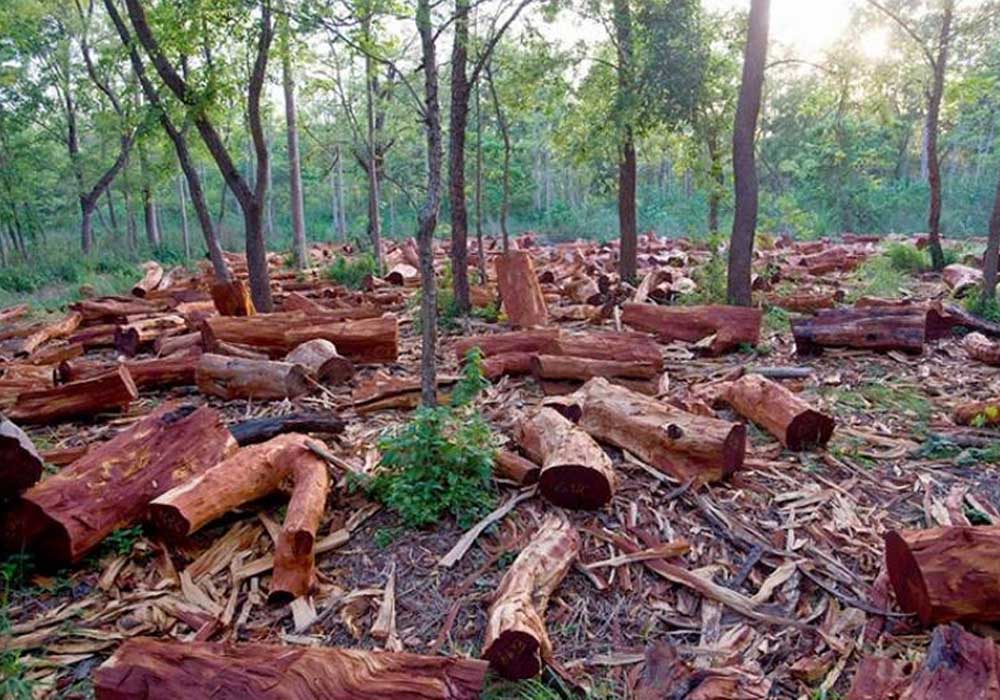 Our nation since the eve of its foundation has suffered the ill fate of having an extremely scant forest percentage, and this small number has only dwindled over the course of time. Never-ending passages of trees refashioned into metaled roads, frail chimpanzees living in snowcapped mountains left in need of homes, ripe, fostered crops and densely populated settlements being ravaged by towering, outpouring bodies of water are merely an iota of the repercussions brought about as a consequence of deforestation. Forests are the lungs of our land, they give us oxygen, alleviate the pressing issue of climate change, and provide us with a multitude of other environmental benefits, however in our own country, they are cut down primarily due to industrial uses, which have increased over time due to the rapidly increasing population. The deforestation carried out in Pakistan to suit those needs has increased to such an extent that LHC reports that Pakistan’s deforestation rate has become the highest in the world at 0.2%-0.5% per annum.

As a result, Pakistan’s forest percentage plummeted from 4% in 1990 to 2.2% in 2010 as it lost 33.2% of its forest cover. Furthermore, in 2015 UNDP reported that the forest percentage had dwindled even further to 1.9% and the current deforestation rate has ensured that this percentage doesn’t increase. Experts have stated that if the current rate of deforestation persists, Pakistan will have no forests in 50 years, leading to catastrophes such as paucity of oxygen, exacerbating the pressing issue of global warming due to no sequestration of carbon dioxide by forests which mitigates the dreadful effects of greenhouse gases, and no timber for industrial uses, which has been one of the leading reasons for deforestation in the first place.

The intangible benefits of forests outweigh the tangible, industrial uses of forests, as stated by the LHC that the former is eight times more beneficial than the latter, however, despite the presence of trees being more advantageous than their uses when they are cut down, industrial companies indulge in overexploitation and excessive deforestation to cater to their needs, and this greed for the natural resources conceived by deforestation prompted the formation of timber mafias, which have become an even greater source of predicament for the government of Pakistan than industrial companies themselves.

Forests are essential in preventing settlements and crops from flooding by acting as a natural absorber of water, they reduce the adverse effects of global warming through carbon dioxide sequestration which is reason enough for us to save forests, but forests can’t just be saved by halting excessive cutting of trees in our environment. In order to ensure an increase in forestation rate and strive towards achieving the recommended forest percentage of 25% the community needs to plant trees in compensation to the trees we cut down and carry out plantation drives in barren areas which have not been victim to urbanization.

In the status quo, the youth of Pakistan has taken numerous initiatives to increase forest rates in Pakistan, so that our heavily polluted environment can be subject to reform rather than transform into a life-threatening atmosphere. Non-Governmental Organizations managed by youths have tackled the low forest rates through held plantation drives in Pakistan, and have succeeded in planting a respectable amount trees, however the youth alone cannot work to improve the situation regarding forests in our nation, especially when industrial companies and timber mafias continue to carry out deforestation at alarming rates, ultimately negating the point of such plantation drives.

The government needs to increase its involvement in resolutions to be made in order to solve the problem of deforestation, especially through collaboration with organizations such as WWF and UNDP, as well as with the youth. Youths can be utilized by the government to create forces in order to combat timber mafias all over Pakistan, as they have started to in KPK. The billion trees project is a great initiative towards the mitigation of this deforestation crisis and has also been praised by several countries and by the United Nations Environmental Program (UNEP). It provides an unparalleled platform for the youth of Pakistan to make an effort towards helping their country and should thus be be continued with full vigor regardless of any regime change.

The processes that industrial companies carry out for their convenience are also major contributors to deforestation. Industrial companies need to be sanctioned from enacting excessive deforestation, and there needs to be a proper mechanism of accountability that ensures penalization of people who indulge in illegal deforestation. The government has started to conduct plantation drives in order to improve the situation regarding forests in our nation. However, it is extremely pressing to ensure that the government itself also adheres to its own national environmental laws and climate laws which it has evidently failed to do in the past.

Lastly, it is our job as youths, the future of our nation to inculcate the prospect of a better and safer environment into their minds, and to bring reform to our present environmental conditions. An important contributor to harmful deforestation is the lack of awareness about the status quo of forests in Pakistan, especially in underprivileged communities, which needs to be solved by raising awareness about deforestation and the importance of sustainable forestry through the government and NGO’s, chiefly among young civilians if we want to see a future where forests are abundant, not a future that has been forecasted by experts presently. Cooperation with not only international organization like the United Nations and WWF, but also with regional authorities, and housing authorities like DHA is exceptionally essential to protect forests in our country, as they will help keep accurate checks and balances on the comprehensive solutions and policies to be introduced by the government to ameliorate our forest rates and percentage. It is imperative for our nation to join hands and work together to make sure that we don’t succumb to change, but rather, see ourselves to be the change.