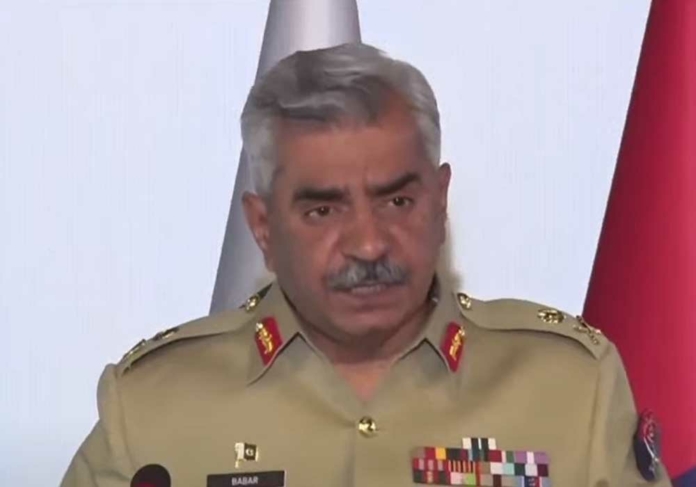 DG ISPR General Babar Iftikhar has said that during the National Security Committee that there was no evidence of involvement or conspiracy in the US cypher issue.

During a news conference in Rawalpindi, the DG ISPR stated, “The reason for this press conference is to notify you about the murder of notable senior journalist Arshad Sharif in Kenya and the circumstances surrounding it.”

According to Gen. Iftikhar, the news conference is being held at a time when it is “essential to deliver the facts appropriately” to help distinguish between “truth, fiction, and opinion.” He said that PM Shehbaz Sharif had been told of the news conference by the military’s media wing.

Additionally, he added, it was important to identify the causes for the construction of a certain story and the deception of others.

“A focus of criticism was also the head of the army staff. There was an effort to create a split in society.”

Gen. Iftikhar continued by stating that Sharif’s reputation as an investigative journalist stemmed from the fact that he produced several programs on the topic after the cypher was revealed, which PTI head Imran Khan has claimed to be proof of a foreign plot to overthrow his government.

The former prime minister was the subject of multiple meetings and interviews, according to the DG ISPR. It was said that he was shown the cypher and the meeting minutes as a result.

Gen. Iftikhar stated that the encryption had been discussed with Imran on March 11 and that Imran had described it as “not a huge issue.”

“It surprised us when on March 27 a piece of paper was waved and a ridiculous attempt was made to construct a narrative.”

He said that several facts had come to light regarding the cypher had surfaced, exposing the “baseless and unsubstantiated” story that had been put forward about it.

He said that the Inter-Services Intelligence (ISI) had also not discovered any proof of the conspiracy against the PTI administration and that the ISPR had notified the National Security Committee of this.

“All of this is included in the record. This was something we wanted to make public. And we gave the then-government the final say.”

“ARY News played the part of a spin doctor in this media trial, attacking the army and spreading a false narrative… the NSC meeting was portrayed in the improper context.”

According to Gen. Iftikhar, the terms neutral and apolitical were misused. The institution and the army commander exhibited calm in the face of this entire unfounded rumour, and we made every effort to convince politicians to negotiate compromises.”

He urged the populace to believe in your institutions and described Pakistan as a “dignified and sovereign nation.”

“Nobody wants to spend 30–40 years in the military and then be called a traitor. Weakness and errors are both possible for us, but we can never be a traitor or a conspirator. Without the people, the army is worthless.”