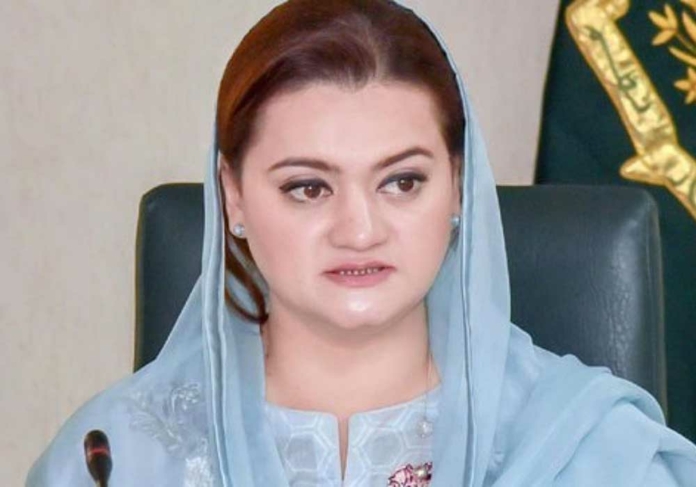 Minister for Information and Broadcasting Marriyum Aurangzeb on Thursday asked Chairman of Pakistan Tehreek-e-Insaf Imran Khan to inform the public as to when he would go to court regarding the Toshakhana issue.

In a tweet, she said, Imran Khan after being “caught red-handed in a watch theft case” had announced that he would approach the court.

“If legal consultation has been completed on the issue, now he should disclose the date of approaching the court in the Toshakhana case,” she quipped.

The minister said that one day had passed after the announcement of approaching the court [by Imran Khan] and the people were anticipating an announcement from Imran Khan in.

But, she said that the date for filing the case in court was not announced by Imran Khan.

Separately, Federal Minister for Climate Change Senator Sherry Rehman on Thursday said the “bluster and confusion of PTI chief Imran Khan showed that he is badly exposed” under the garb of his “orchestrated” narrative.

In a flurry of tweets on her official Twitter handle, the federal minister said that why Imran Khan, who used to hurl accusations of thieves and robbers against his political rivals, was angry at the news about the Toshakhana scandal.

“If you have not stolen then why you are objecting to the news on Toshakhana gifts? Reporting is the responsibility of the media, you want no one to talk about your corruption and theft? Why are you afraid of the news if you did not steal?”

The minister said that Toshakhana scam was not an accusation but rather a proven case.

“You [Imran Khan] have been disqualified from membership of the National Assembly in the same case. You have been punished by the Election Commission of Pakistan for committing corrupt practices,” Sherry Rehman said. “Your every narrative, every slogan is based on hypocrisy and lies,” she added.

Addressing a press conference, he said, “Your theft has been exposed, we have no demand but Imran Khan must show the receipts of the Toshakhana gifts sold in

“Any gift received from foreign dignitaries is first deposited in Toshakhana and later on another procedure of market evaluation is carried out if a recipient wants to keep it. But no such thing happened in this case,” he alleged.

However, he said, as per the market evaluation that had been carried out in a thorough professional and technical way, its price stood at around $12 million, almost Rs 1.7 billion at that time and now about Rs2 billion.

He said Imran Khan bought the watch without adopting the laid down procedure.

He criticized the PTI chairman for hiring the services of lobbyist David Fenton in the US, who was known as the founder of the denuclearization programme, besides getting money and land from Malik Riaz to protect his money-laundering and receiving millions of pounds from Arif Naqvi, Chief Executive of the Abraj Capital and Investment Company.

Regarding the provision of gas to consumers, Malik assured that the gas availability during the winter season would be better as compared to the previous year.