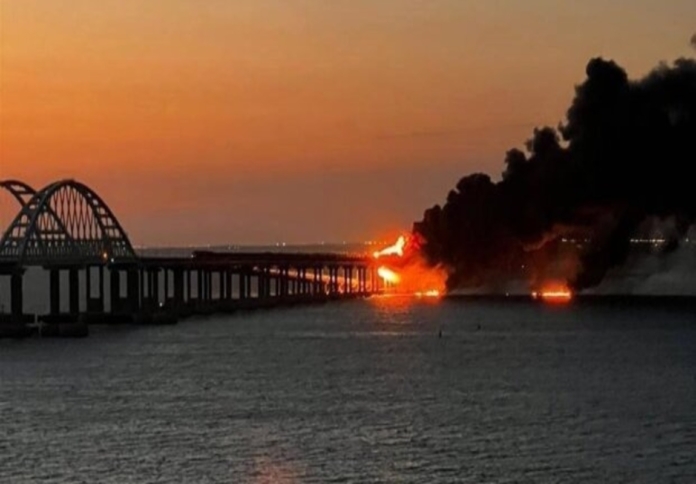 A truck loaded with explosives hit the only bridge connecting the Crimean Peninsula with mainland Russia on Saturday.

Russian national anti-terrorist committee confirmed that the incident damaged a big part of the bridge. “The arch above the shipping section of the bridge has not been damaged,” added the committee.

According to RT report, the blast caused the road on the vehicle section to partially collapse. It also set fire to seven fuel tanks on a runaway train on the concurrent rail segment, as per early reports.

The official said that the blast occur after 6 am.

Regional transport minister of Russia Nikolay Lukashenko stated that the authorities are considering launching a ferry service to tackle the situation.

Crimean Parliament Speaker Vladimir Konstantinov has accused “Ukrainian vandals” of the bridge’s damage and said that the damage will be repaired soon.

Russian Senator Alexander Bashkin condemned the attack and said that Moscow will respond to the attack on the Crimean Bridge with a “possibly asymmetric response.”

Whereas, Duma (lower house of federal assembly of Russia) Deputy Oleg Morozov said the “terrorist attack” on the bridge is just like a “declaration of war without rules.”

The 19-kilometre (11.8-mile) bridge become functional in 2020 the bridge consists of a railway section and a vehicle section. Crimea Bridge is one of Moscow’s most fundamental infrastructure investments in the occupied peninsula.