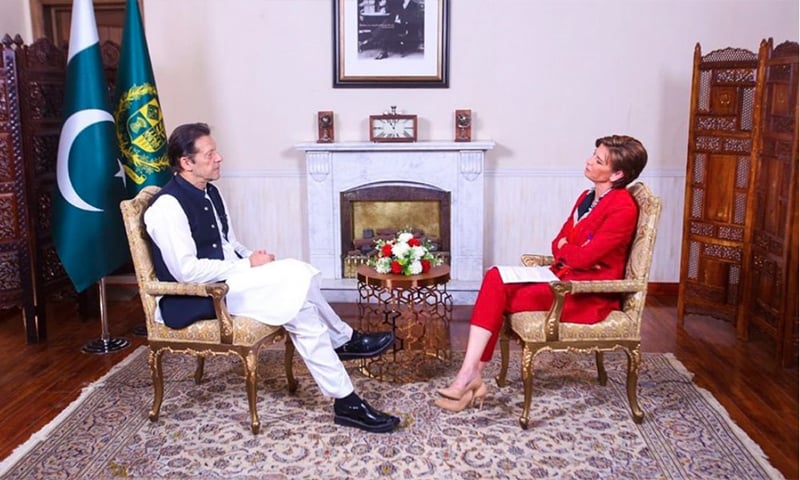 Prime Minister Imran Khanâ€™s comments about the Haqqani Network being a â€˜tribe of Pashtunsâ€™ in his interview to CNN have left many bewildered.

The premier was interviewed by CNNâ€™s Becky Anderson, who asked Khan about his opinion on the Haqqani Network, a group she said was responsible for numerous attacks against western forces. Anderson particularly stressed that the network occupied key positions in the interim cabinet in Afghanistan. Khan responded that the US failed to understand the Haqqani network, which was a tribe in Afghanistan.

Twitter was bemused at the statement as many factually corrected Khanâ€™s version of history. Journalist Ihsanullah Tipi Mehsud said that the Haqqani Network was formed by Jalaluddin Haqqani who hailed from the â€˜Sultankhail sub-tribe of Zadranâ€™ in Paktia province of Afghanistan.

Haqqani is not a tribe but a family name of Jalaluddin Haqqani. Jalaluddin belonged to the Sultankhail sub-tribe of Zadran, in the Wazi Zadran district of Afghan Paktia province. https://t.co/Lx7CDMdxJX pic.twitter.com/DB5tCkRmXC

Hudson Institute South and Central Asia Director Hussain Haqqani jabbed at the PM and said that if Haqqani Network was a tribe, then Khan belonged to the â€˜Aitchison and Oxford tribesâ€™. He added that Jalaluddin and his sons got the name ‘Haqqani’ by virtue of their attendance of Dar-ul-Haqqania in Akora Khattak, Khyber Pakhtunkhwa. The namesake also took the opportunity to comment his own ancestry and said that he hailed from the Haqqani family in Delhi.

If Jalaluddin Haqqani is from Haqqani Tribe then Imran Khan is from Aitchison and Oxford Tribes. (Jalaluddin and his sons get the name Haqqani from attending the Haqqania Madrasa in Akora Khattak, near Nowshera in Pakistanâ€™s KP province.)

Journalist Hamid Mir echoed the same history lesson as others and added that Jalaluddin played a seminal role in defeating Soviet Union in Afghanistan.

Just heard PM @ImranKhanPTI on @CNN he said Haqqani is a tribe in Afghanistan. Itâ€™s not a tribe.All students of Darool Alum Haqqania Akora Khattak KPK are called Haqqaniâ€™s including Jalaluddin Haqqani who played important role in the defeat of Soviet Union in Afghanistan.

Some members made general remarks on Khanâ€™s assertion. National Democratic Movement (NDM) member Khushal Khan was perturbed at Khanâ€™s defense of the Taliban and said he didnâ€™t have to falsify information to support the group.

There is no Pashtun tribe called â€˜Haqqaniâ€™ in Afghanistan @ImranKhanPTI. The Haqqani Network is not named after any Pashtun tribe. We understand you have to defend Taliban, but at least get your facts right.

Sociologist Nida Kirmani was scared that Khan could make fallacious comments so brazenly. Kirmani added that Khanâ€™s conviction almost made her believe the Haqqani Network was a tribe.

Does anyone else find the ease & sincerity with which Imran Khan can lie through his teeth frightening? I mean, I almost believed there was a Haqqani tribe as well!

With everyone critiquing Khan, his opposition also jumped the bandwagon. Pakistan Muslim League-Nawaz (PML-N) Information Secretary Asma Zahid Bokhari lambasted Khan for speaking about things he had no knowledge of. She added it was strange Khan boasted he knew everything even though for him Germany and Japan shared a border.

Bokhari had referred to another incident of Khanâ€™s mistaken knowledge in 2019 in which Khan said that Germany and Japan shared a border.

Wednesdayâ€™s CNN interview was the first time the PM spoke to an international media outlet since Afghan Taliban came to power on August 15. Khan also said that the Taliban needed time to deliver on their promise to safeguard human rights and meanwhile needed international aid to deter mayhem.