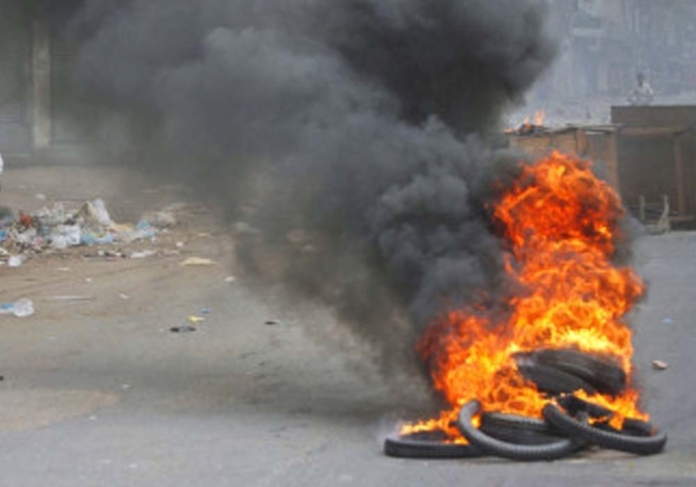 The air quality of the twin cities of Rawalpindi and Islamabad is deteriorating due to the burning of tyres amid protests by Pakistan Tehreek-e-Insaf workers, causing congestion on roads and interchanges across both the cities.

The PTI workers took to countrywide protests on November 4 (Friday) after the party chairman Imran Khan got injured while leading his long march to the federal capital as he was shot in his shin near Wazirabad city of the Punjab province. The party workers had blocked routes and set tyres at fire near Shamsabad on Murree Road, Peshawar Road, whereas diversions were placed for both sides of traffic at Margallah Pahari point of GT Road and traffic coming from Taxila via GT Road to Rawalpindi. Moreover, alternatively, traffic was diverted to Srinagar Highway from Chungi No. 26 due to the protesters choking the thoroughfares.

According to the United States Environmental Protection Agency (EPA), the impact of fires due to burning of fires was highly health injurious and environment damaging and were difficult to handle. It added that these fires risk air, soil, and water pollution. “However, if a tyre fire occurs, tyres break down into hazardous compounds including gases, heavy metals, and oil. The average passenger car tire is estimated to produce over two gallons of oil when burned,” the US EPA stated on its website.

The oil released by tyres during burning were discharged directly into ground and surface water and hence making it a significant environment pollutant and highly combustible material. “Air pollution caused by tyre fires may include polycyclic aromatic hydrocarbons (PAHs), benzene, styrene, phenols, and butadiene,” the US EPA said. The Pakistan Environmental Protection Agency (Pak-EPA) daily air quality report noted that the air pollutants ratio recorded were below permissible limits and the air quality was healthy as a day earlier rainfall impact and cloudy weather subsided the air pollutants.

The air quality data was collected by Pak-EPA for 24 hours based on three intervals of eight hours of data collection from different locations of the federal capital. The Pak-EPA data revealed that the air quality throughout the three intervals of data monitoring remained low as the ratio of pollutants was below the permissible limits of national environmental quality standards (NEQS).

The hazardous air pollutant particulate matter of 2.5 microns (PM2.5), which was a lethal atmospheric contaminant, remained 33.7 micro grammes per cubic meter on average which is lower than the NEQS of 35 mic-programmes per cubic meter and denotes the air quality healthy. The PM 2.5 is generated through combustion of an engine, industrial emissions, burning garbage or inflammable material and dust blown up by fast moving cars plying on non-cemented patches of the roads. Moreover, the frequent forest fires in the federal capital also created high suspended particles, dust and particulate matter in the atmosphere.

The nitrogen dioxide (NO2) and sulphur dioxide (SO2) were recorded below permissible ratio as it were recorded 4.17 and 21.23 micro-grammes per cubic meter in past 24 hours in the atmosphere against the NEQS of 80 and 120 micro-grammes per cubic meter respectively. These effluents were mainly produced during the operational activities of industrial plants and factories that were already under control. The EPA urged the masses with respiratory conditions and other critical heart or lungs diseases to avoid prolonged outdoor visits and wear face coverings and goggles when the air quality was unhealthy while venturing outdoors.