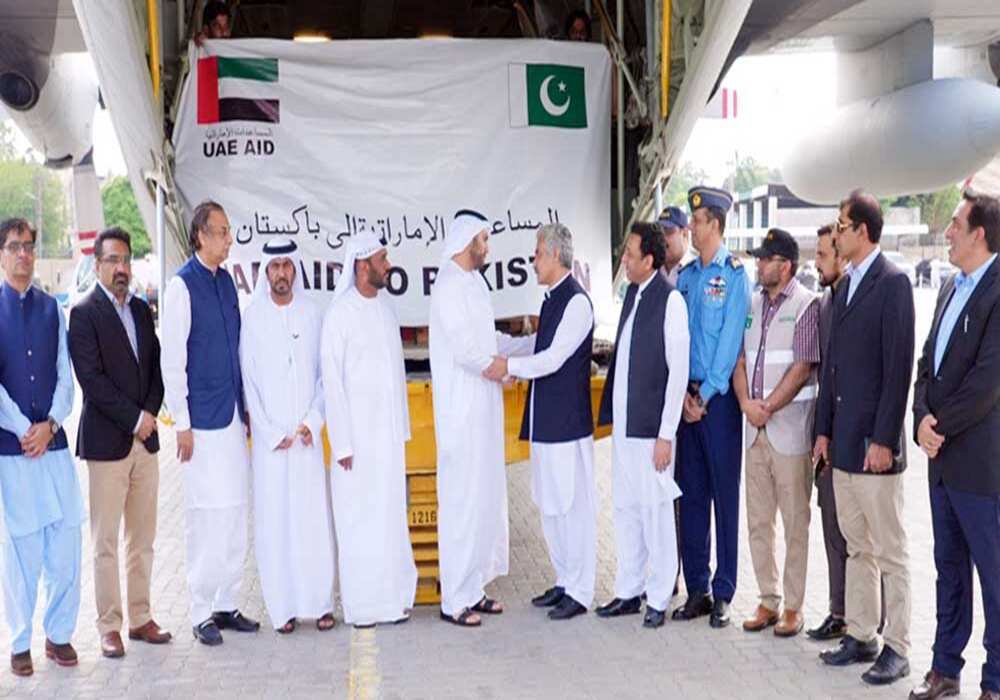 Four planes from the United Arab Emirates and Qatar that were bringing aid supplies for flood victims landed in Pakistan as the nation continued to be ravaged by the monsoon rains.

On Saturday, UAE sent a field hospital to treat victims of water-borne infections, and planes delivering relief supplies landed at the Jinnah International Airport in Karachi from Doha and UAE.

Pakistan is getting aid for flood assistance, particularly from Saudi Arabia, Qatar, the United Arab Emirates, and Turkey.

On the direction of Chief Minister Punjab Chaudhry Pervaiz Elahi, Provincial Minister for Industries and Housing Mian Aslam Iqbal received the relief goods at the airport.

Charge D Affairs of UAE Embassy Rashid Al Ali handed over the relief goods to the minister who, while talking on the occasion, said that “we are grateful to the UAE for sending relief goods for the flood victims of Punjab”.

He said that UAE has stood by Pakistan in every difficult hour and that the relief goods being sent by it will soon be distributed among those affected. He apprised the Charge D Affairs of UAE and the delegation about the ongoing relief activities in the flood-affected areas.

Iqbal thanked the UAE delegation on behalf of Chief Minister Punjab Chaudhry Pervaiz Elahi for sending the relief goods. Meanwhile, Elahi thanked the UAE and their Ambassador Hamad Obaid Ibrahim Salem Al-Zabi and said that the UAE government has always greatly helped the people of Pakistan in every time of difficulty and trial.

The CM stated that the friendship of Pakistan and the brotherly Islamic country UAE is tied in eternal relationships. Elahi said that the relief goods being received from the UAE will be distributed among the flood victims and their needs will be fulfilled.