UK keen to change style of partnership with Pakistan: diplomat 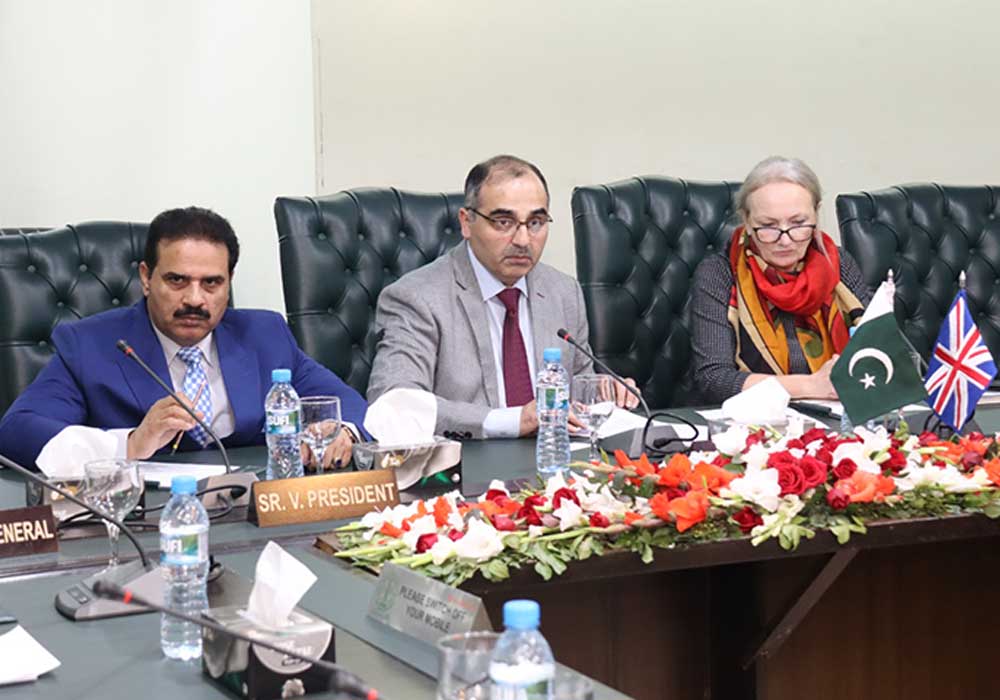 Deputy High Commissioner and Trade Director for Pakistan Sarah Mooney has said UK is working to increase trade and investment in Pakistan so that the country could achieve the place it should have. She said that the High Commission is researching to identify those products which can get significant success in the UK’s market and after identifying those products, we would come back to Pakistan’s business community.

She was speaking at the Lahore Chamber of Commerce and Industry. LCCI President Kashif Anwar and Senior Vice President Chaudhry Zafar Mahmood also spoke on the occasion while Executive Committee Members were also present.

The Deputy High Commissioner said that the floods caused devastation and disaster for Pakistan and I am very encouraged to see that British citizens have contributed around 100 million pounds for the flood relief efforts. British government has a disaster relief fund and the UK citizens are contributing in that fund.

She said we have 96% duty free products coming from Pakistan and are working on the rest. She said that education is our priority area where we want to collaborate with Pakistani institutions and enhance cooperation and we are also keen to support education below university level. The other which we are interested in are sustainable growth, green energy and infrastructure development. Lastly, the healthcare is our other priority area.

“It is pertinent to mention that Pakistan’s exports to UK are dominated heavily by textiles. We are of the view that the bilateral trade volume which currently stands around 3 Billion Dollars should be taken to at least 10 billion dollars”, he added.

LCCI President said that we are thankful that even after Brexit, the United Kingdom has kept on giving us the same level of market access, as there was under the GSP plus scheme. We have learnt that UK Government has launched the Developing Countries Trading Scheme through which Pakistan will continue to benefit from duty free exports to UK. Furthermore this scheme will remove tariffs on more than 150 products exported from Pakistan. Please share with us more details of the said scheme.

He said that Pakistan is facing steep economic challenges. The devastating floods of 2022 affected 33 million people in Pakistan and more than 1,700 people lost their lives. The total economic losses are estimated to be over 30 billion dollars. The sectors of Housing, Agriculture, Livestock, and Infrastructure suffered the most significant damages.

He said that the current foreign exchange crisis has forced restrictions on the ability of banks to open LCs. Shipping containers are stuck at Ports which are creating threats to the supply chain of manufacturing and industrial sectors.

LCCI President said that a heavy percentage of Energy is still generated from expensive imported fuel which has resulted in steep tariff hike and huge circular debt. We cannot afford to sustain with that anymore.

He said that we have recommended to the Government immediately declare all the Ports as Bonds to save businesses from port storage charges. We have also requested the Government and other stakeholders to engage with Shipping Lines operating in Pakistan and convince them to waive off demurrage and detention charges.

He said that import substitution through Industrialization should be the top most priority, followed by enhancing exports to manage our trade & current account deficits. The Government has to come up with a concrete strategy of import substitution so that we are able to expand our manufacturing base and decrease our reliance on some high-priced imports.

He said that energy production must be enhanced from renewable sources to curtail our import bill. There is need for construction of dams and water reservoirs. This is an important area where the UK Government can extend support to Pakistan.

Kashif Anwar said that there are great opportunities for British companies to enter into joint ventures with Pakistan companies and enhance economic cooperation in the areas of healthcare, education, green energy, infrastructure, pharmaceuticals, agriculture, IT, Mining and Tourism. Combating climate change is an important area where both the countries need to enhance cooperation.

He said that there is also a great potential for enhancing Pakistan’s Food Sector exports to UK. For this purpose, the Pakistani exporters need better guidance for meeting the UK standards to gain deeper penetration into its food market.

He said that LCCI is particularly concentrating on the development of SMEs with special focus on Women Entrepreneurs. We would certainly like to collaborate with British High Commission for attaining the desired results.