CM discusses promotion of polo in Punjab, IT sector with Pakistani-origin UK delegation 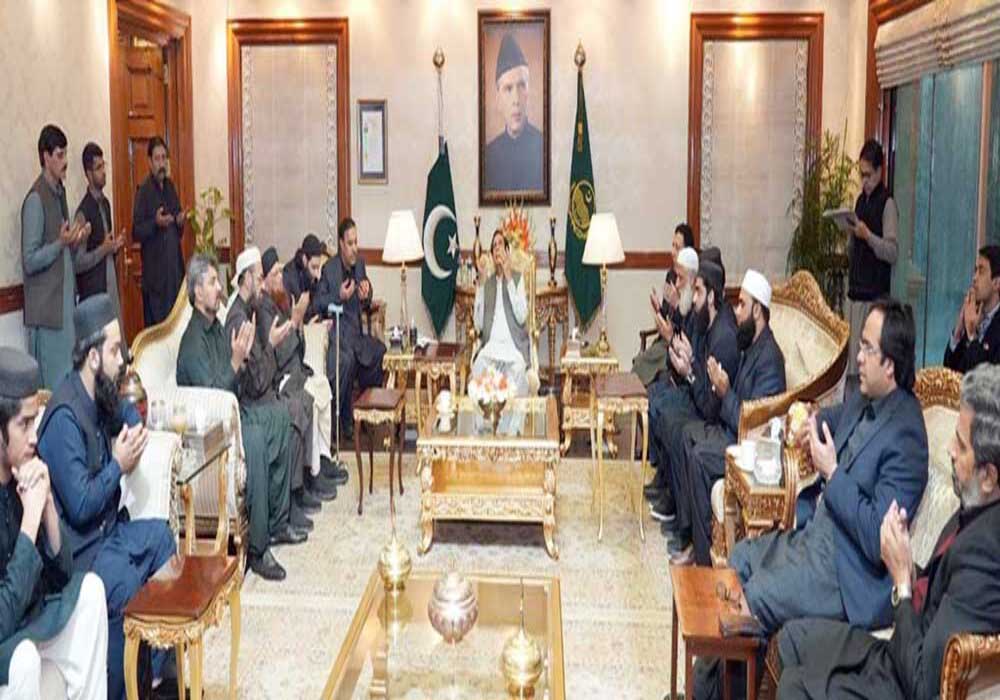 Chief Minister Punjab Chaudhry Parvez Elahi on Sunday met with a delegation of ulema, headed by President Wafaq-ul-Madaras Al-Arabia Maulana Muhammad Taqi Usmani in which the ulema paid rich tributes to him for taking exemplary steps with regard to the service of religion.

Speaking on the occasion, the chief minister stated that religious work is being done in a rightful manner due to the prayers and blessings of the Ulema-i-Karam. He said that Muthahida Ulema-i-Board Punjab Amendment Bill and University of Quran and Seerat Studies Bill are being presented in Punjab Assembly. He revealed that soon after assuming the office of Chief Minister he immediately restored the Quran Board adding that Nazara and Quranic translation has been made compulsory for students in every school and college of Punjab.

Elahi said that if the minds of students are diverted towards religion then a strong nation will be built. One lakh jobs are being generated for the ulema and huffaz to impart teaching in Nazara and Quran to the students. CM Parvez Elahi stated that Allah Almighty bestowed on him distinction to introduce the first ever legislation for the eradication of interest from the province, and noted that 10 years punishment has been fixed in case of charging interest at private level. Legislation has also been done for a staunch belief in the Khatme Nabuwat (SAW), and for the first time this belief has been incorporated in the marriage certificate.

The grade of Imam Masjid has been enhanced and they are also being given promotion. The CM directed the administration not to stop NOCs of mosques without any solid reason. Maulana Muhammad Taqi Usmani, President Wafaqul Madaris, said that the government of CM Elahi will continue to run owing to the blessings of the service it is doing for religion, and that the CM is rendering great services for the religion, and the ulema always pray for him. He lauded CM Parvez Elahi for doing immense work for the religion in a short span of time.

Also, Chief Minister Elahi and a Pakistani-origin delegation from England discussed matters of mutual interest, promotion of the sport of polo in Punjab and information technology sector, on Sunday. The delegation comprised of former coaches of Pakistan’s Polo Team Omar Minhas, Haseeb Minhas, IT expert Fatima Mazhar and Farasat Ali Chattha. Parvez Elahi told the delegation that all possible steps were being taken for promotion of information technology in Punjab, adding that people could easily avail 30 government services through ”Go Punjab App” by sitting at their homes.

The CM said, “We would welcome IT experts coming from foreign countries in Punjab.” He added that information technology as a viable route to attain fastest progress across the globe. The CM stated that provincial government intended to provide opportunities to the young promising polo players to move ahead in Punjab. “Polo is a nice sport and young players will be persuaded as well as encouraged to excel in this sport.”

Information Technology expert Fatima Mazhar said more IT projects would be introduced in Pakistan after Careem and Cap-Tracking and vowed to introduce the latest information technology facilities in Punjab. Haseeb Minhas eulogised CM Parvez Elahi as a visionary leader as he had devoted himself to serve masses. Omer Minhas acknowledged that Chaudhry Parvez Elahi’s politics was focused on public service, instead of attaining power and authority.

On a separate note, Chief Minister Elahi greeted the people of Sindh from the core of his heart on the occasion of Sindh cultural day, named as ‘Aekta Jo Dihaaro’ (The Day of Unity), on Sunday. In his message on the day, he said the Sindhi culture is rich with the spirits of hospitality, tolerance, love and the Sindhi culture is a guardian of its sterling traditions. The cultural magnificence of Mohenjo-daro and Ramkali included in the UNESCO list are liked across the globe, he added. The Sindhi culture is a pleasant and an alluring blend like various colours of Ajrak, he added.