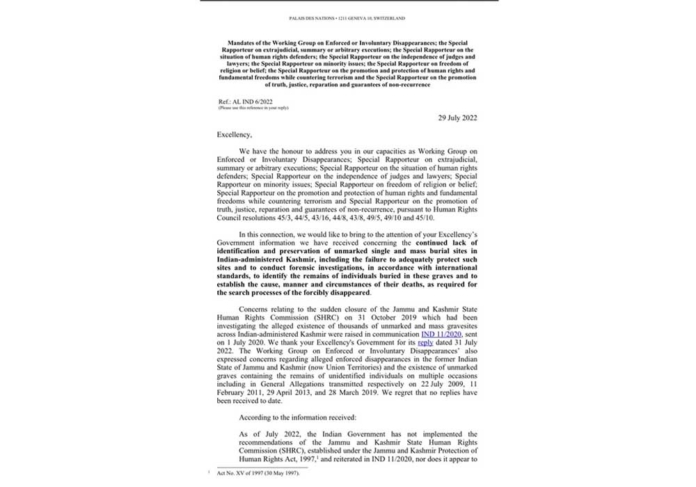 It also includes the failure to adequately protect such sites and conduct forensic investigations in accordance with international standards to identify the remains of people buried in these graves and to establish the cause, manner, and circumstances of their deaths, as required for the search operations of the fort.

The Working Group on Enforced or Involuntary Disappearances expressed concern about the finding of unmarked graves containing the remains of unidentified persons as well as alleged enforced disappearances in IIOJK on many occasions.

The Indian Government does not appear to have carried out independent, prompt, and efficient forensic investigations of reported unmarked and mass grave sites in the districts of Baramulla, Bandipora, Kupwara, Rajouri, and Poonch.

The SHRC and six other human rights organizations were shut down in October 2019 as a result of an Indian Government decision, despite appearing to be making real efforts toward accountability and compensation for victims in IIOJK.

Over 100,000 cases of severe human rights abuses were still being looked into at the time the SHRC was disbanded.

The Indian Government has not yet notified the impacted victims of how the ongoing cases and investigations would progress as of the time of writing.