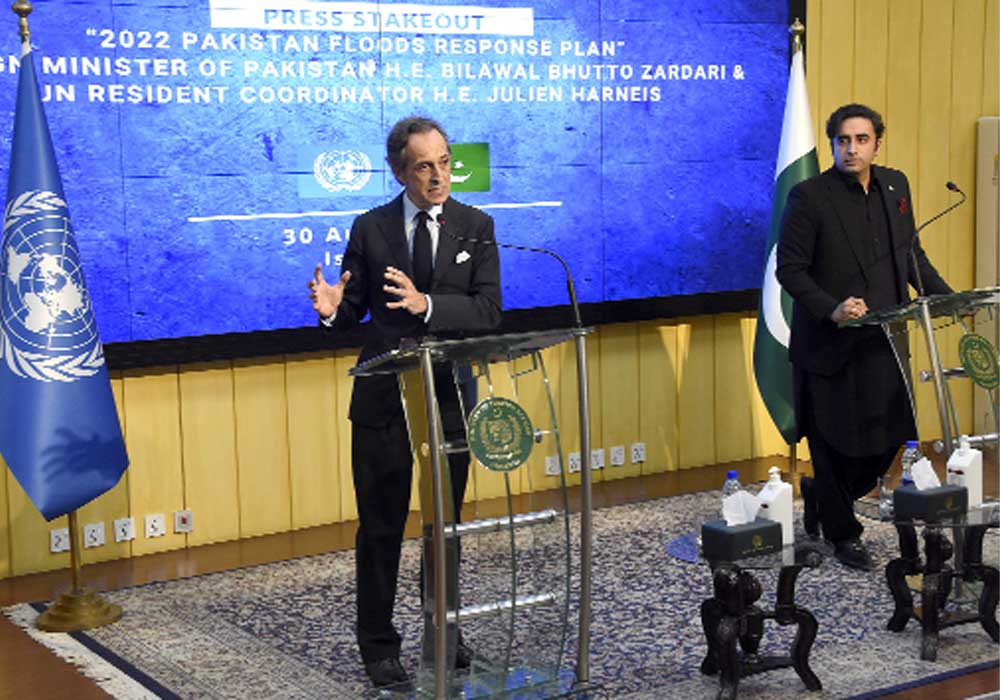 The United Nations (UN) and Pakistan on Tuesday issued a flash appeal for $160 million to cope with the devastation caused by unprecedented rains and floods, which have so far claimed nearly 1,200 people’s lives.

The appeal was jointly issued by UN Secretary-General Antonio Guterres and Foreign Minister Bilawal Bhutto Zardari during a ceremony in Islamabad. Guterres, in his video message played at the ceremony, said the required amount would be disbursed to provide food, water, sanitation, emergency education, protection and health support to 5.2 million flood victims during the first six months of the crisis response. The aid will also help prevent outbreaks of cholera and provide food to mothers and their young children. “Pakistan is awash in suffering. The Pakistani people are facing a monsoon on steroids – the relentless impact of epochal levels of rain and flooding,” the UN secretary-general added.

Guterres described the recent floods, which have inundated nearly half of Pakistan, as a “climate catastrophe”, noting that South Asia is one of the world’s “climate crisis hotspots”.

People living in these hotspots are 15 times more likely to die as a consequence of the changing climate, he warned. In his remarks, Bilawal said the devastation witnessed in Pakistan following the recent spell of unprecedented rains and floods showed that the country had become “ground zero” of global warming, the “biggest existential threat” of this century. “The current cycle of super flooding we see today is part of extreme weather patterns. Unprecedented levels of cloud bursts and torrential rains have triggered widespread devastation, urban flooding, river floods and landslides, resulting in the loss of human life, livelihoods and livestock,” Bilawal said.

He described this year’s “super floods” as a “climate calamity”, adding that what the country was facing today had been no above average monsoon. “It is an entirely new level of climate-led catastrophe,” he said, fearing that more rains would worsen the situation in already flooded areas. He asked for the international community’s help in dealing with the massive challenge posed by the historic floods, which have destroyed or damaged over a million homes as well as hundreds of roads and bridges across the country.

The FM said rainfall in Pakistan since mid-June had been equivalent to three times the 30-year national average and the southern, central and northern regions of the country were worst affected. The scale of destruction is feared to increase that of the 2010 “mega or super floods”, which submerged a fifth of the country’s land and killed over 2,000 people, he added. Sharing details about the extent of damage, he said 72 districts were declared calamity-hit, over 33 million people were affected – which is the size of a small country – over 1,000 people had lost their lives and several others were grappling with the loss of livelihoods and displacement.

“Hundreds of thousands of people have been displaced and forced to spend days and nights … under a merciless sky, and (a) lack of access to food, water and shelter are making life harder with each passing day,” he added. Moreover, he said the damage to infrastructure and railway networks was impeding efforts to deliver aid and to shift people from flood-hit areas to safer locations. Stressing the need to expand and scale up the ongoing relief efforts and response, the FM said, “The appeal prioritises focused interventions in areas of education; food security and agriculture; health; nutrition; protection; shelter and non-food items; and water, sanitation and hygiene.”

“We also need assistance with livelihoods and livestock support as well as relief machinery and equipment,” he added. He said the government was cognisant of its responsibility and had earmarked $173 million to help flood-hit people through direct cash transfers. This, Bilawal elaborated, would be disbursed through the Benazir Income Support Programme (BISP) to 1.5 million families who would each receive Rs25,000 ($115) in immediate cash relief.