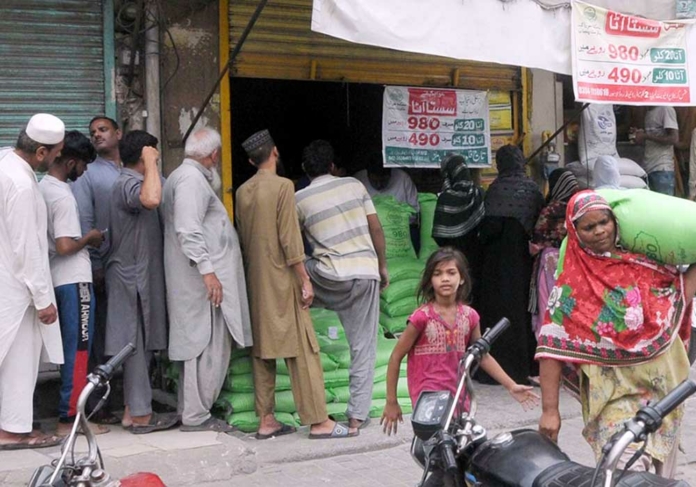 The sufferings of citizens seem not to end as they are forced to buy flour from the market at higher prices under the nose of the authorities.

The administration has announced the establishment of sale points in different areas of the city to provide flour at controlled rates nearby their homes. However, despite the claims, citizens continued to suffer as they hardly found any government sales point in their areas. After the non-availability of flour in model bazars, they have only choice to buy flour at higher prices from the open market.

“I was informed that government has established sale point in model bazars but I couldn’t find it here,” said a customer standing at Model Bazar Thokar Niaz Baig. Hailing from Johar Town, he said that many shops have shortage of flour while those have with them were selling it higher prices. Punjab government on September 20, increased Rs315 per 20Kg bag as price was hiked up from Rs980 to Rs1295. Same time, speculations of shortage of wheat in province also surfaced but Food Department’s officials denied such news and claimed the sufficient availability of wheat with department.

Despite after the increase in flour prices and sufficient availability of wheat in province, authorities have been proven fail in the provision of most basic commodity to citizens. Yesterday, long ques of customers were witnessed at Wahdat Road Sunday Bazar where hundreds of people came to buy flour. “Standing in queues and waiting for hours just to get one bag of flour is painful,” said a customer while blaming Punjab government that it was humiliating citizens by hurting their self-respect.

He alleged that in open market a 20Kg flour bag was being sold at rate of Rs1,500 to Rs1,600 while it was being done under the nose of authorities. Meanwhile, huge rush of customers was witnessed on different utility stores of the city where a 20Kg bag was still available at Rs800. Against the demand of over 100,000 bags in the city. However, federal government can only supply 38,000 bags at utility stores per day.

Amid the rising flour prices, tandoor owners also have increased the prices of roti and naan from Rs10 to Rs12 and Rs15 to Rs20 respectively. A naan shop seller told Minute Mirror that they were even unable to afford to sell a roti at Rs12 as they have to purchase flour from open market at high prices. “We buy flour from dealers at higher prices and after transportation charges it costs us Rs1,400 per 20Kg bag,” he said.

He also alleged that contrary to the government’s announcement, he could not find any sale point near to his area. On the other hand, Lahore Deputy Commissioner showed his dissatisfaction with 10 price control magistrates. According to sources, the news of citizens’ sufferings had irked the deputy commissioner while on a progress report he found at least 10 magistrates below than performance.