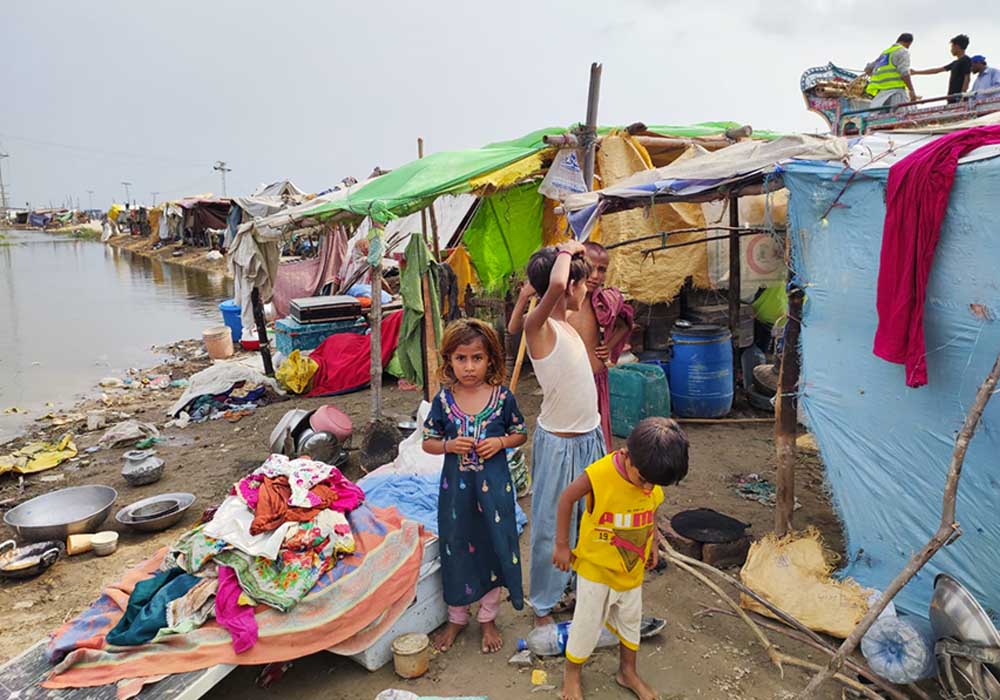 After visiting the flood-affected areas in Pakistan, Regional chief of United Nations International Children’s Emergency Fund (UNICEF) for South Asia George Laryea-Adjei said on Friday that climate devastation in the country was the ominous precursor of catastrophes to come.

“As the catastrophic climate disaster continues to upend the lives of millions of children in Pakistan, it is the most vulnerable boys and girls who are paying the steepest price. “The children I have met here have lost everything: loved ones, cherished schoolbooks, the only homes they ever knew, their schools, their sense of security,” the UNICEF Regional Director for South Asia in a news release said.

“As the flood waters and the media attention recede, the crisis in Pakistan has become an acute child survival crisis. Frail, hungry children are fighting a losing battle against severe acute malnutrition, diarrhoea, malaria, dengue fever, typhoid, acute respiratory infections, and painful skin conditions. As well as physical ailments, the longer the crisis continues, the greater the risk to children’s mental health.

“Nearly 10 million children need immediate, lifesaving support. Hundreds have already lost their lives. Over 1 in 9 children here suffer from severe acute malnutrition – a life-threatening condition. Panic-stricken parents are searching for food to bring even a simple meal home to their children. “In a camp in Sohbatpur, Balochistan, I met Farida, who had fled her beloved home with her five children when the floods struck. She was worried sick about her one-year-old daughter, Rasheeda, who was visibly frail and weakened by acute malnutrition.

“Their story is one among millions. As winter looms, boys and girls crammed inside flimsy tents, when they are lucky enough to have one, will continue to succumb to diseases which in normal times are preventable and treatable. “The boys and girls of Pakistan desperately need our support to survive. And yet the international appeal for Pakistan remains severely underfunded. Hundreds more children will lose their lives in the coming weeks if international support does not come in to scale up interventions. But this story of climate devastation is not only the story of Pakistan.

“In 2022 alone, climate-induced floods have ravaged Pakistan, Bangladesh, northern India and Afghanistan, leaving over 15 million boys and girls in need of assistance. “Extreme heatwaves have scorched the crowded cities of the region, with temperatures climbing up to 48 degrees. Glaciers have continued to melt in Pakistan and Bhutan, while landslides in Nepal have swept away children’s homes and rising sea levels continue to threaten the very existence of Maldives.

“Children have played no part in creating the climate catastrophe in South Asia, yet they are the ones paying the biggest price. This climate catastrophe is threatening the health, wellbeing, and the very survival of over 616 million boys and girls who call this region their home. “Governments must urgently protect the critical water, sanitation and hygiene, health and education services on which boys and girls so direly depend. They must also urgently make sure every boy and girl has the skills and knowledge they need to survive and thrive in a climate-changed world.

“But first and foremost, global leaders must urgently limit global heating to 1.5 degrees Celsius. This is the only way to save children’s lives. “Without urgent global action, the climate devastation we have seen in Pakistan will, I fear, only be a precursor of many more child survival catastrophes to come.”