US delegation vows ‘all possible steps’ for flood victims 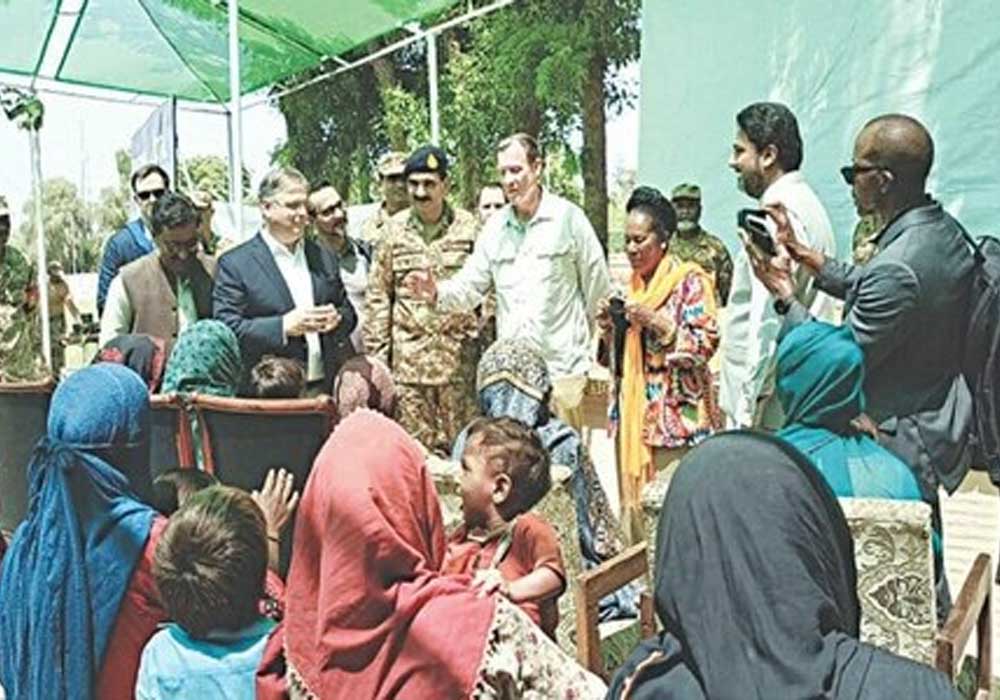 A five-member delegation from the United States led by Congresswoman Sheila Jackson Lee visited flood-hit areas of Sindh on Sunday.

During its visit to the Dadu district, the delegation received a briefing on the rescue operations in the area and losses from the floods. General Officer Commanding Hyderabad Major General Dilawar Khan, Brigadier Hasnat Ahmed, and Deputy Commissioner Dadu Syed Murtaza Ali Shah were present on occasion. Earlier in the day, members of the US Congress, Representative Sheila Jackson Lee and Rep. Tom Suozzi arrived in Pakistan on a two-day visit.

Before departing for Pakistan, Jackson said that the delegation would visit disaster-struck zones and will take “all possible steps” to help flood victims. Flash floods caused by unprecedented torrential monsoon rains have wreaked havoc across the country. But Sindh and Balochistan have been affected the most. According to Sindh Information Minister Sharjeel Memon, more than 1.3 million houses have been damaged, and around 100,000 animals have also died in various areas of the province.

He said that overall 234 tehsils and nine-hundred and eighty-nine Dehs have been affected by rains. The toll from cataclysmic floods in Pakistan continued to climb on Saturday with 57 more deaths, 25 of them children, as the country grapples with a relief and rescue operation of near unprecedented scale. Record monsoon rains and melting glaciers in northern mountains brought floods that have affected 33 million people and killed at least 1,265 people, including 441 children.

The inundation, blamed on climate change, is still spreading. The proportion of children’s deaths has raised concern. On Friday, the United Nations children’s agency (UNICEF) said there was a risk of “many more” child deaths from disease after floods. The country has received nearly 190% more rain than the 30-year average in the quarter through August, totalling 390.7 millimetres (15.38 inches). Sindh, with a population of 50 million, was hardest hit, getting 464% more rain than the 30-year average.

Aid has flowed in from a number of countries, with the first humanitarian assistance flight from France landing on Saturday morning in Islamabad. But Pakistan’s largest charity group has said there were still millions who had not been reached by aid and relief efforts. Initial estimates of the damage have been put at $10 billion, but surveys are still being conducted along with international organisations. The United Nations has appealed for $160 million in aid to help tackle what it said was an “unprecedented climate catastrophe” as Pakistan’s navy has fanned out inland to carry out relief operations in areas that resemble a sea.

Sindh Information Minister said on Sunday that a cut was made in the Manchar Lake to save Sehwan town from flooding, but warned that at least five surrounding union councils will still be affected. The Sehwan Airport, an installation of an oil company as well as Sindh Chief Minister Murad Ali Shah’s home village, is located in the five UCs – Bubak, Aarazi, Wahar, Jaffarabad, and Channa. While addressing a press conference in Hyderabad, the minister said: “Around 125,000 people have to be displaced to near areas.”

Advertisement
Share
Facebook
Twitter
WhatsApp
Email
Print
Previous articleCCPO to criminals: be civil or leave the city, forever!
Next articlePakistan going through ‘monster of a disaster’, says US Congresswoman