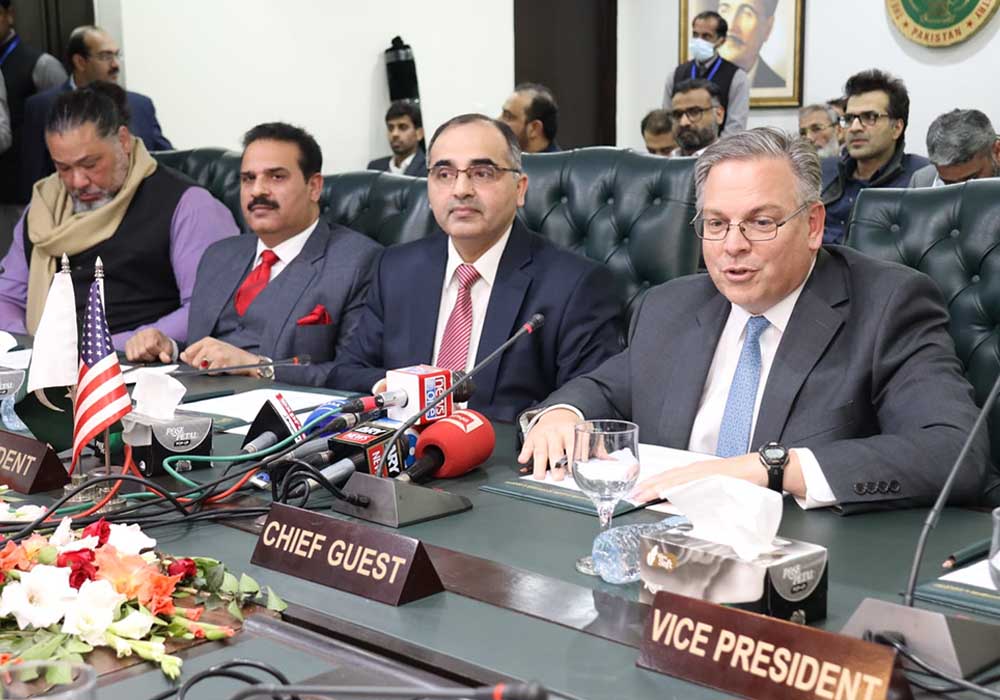 Ambassador of United States Donald Blome has said that “we have 75 years of bilateral economic ties that are backbone of our relations”.

The Ambassador said that US investment in Pakistan has increase 50 percent in the last few years which is highest in decades. “I believe that there still a substantial room for growth in economic ties. He said that we are helping Pakistan to be able to resist climate disasters which includes infrastructural advancement, less dependency on fuel which ultimately leads to the inclusion of green energy. He said there are two ways to decrease the greenhouse gas emissions: one is to enhance infrastructure and the other is to decrease dependency on oil as it also impacts on economic growth with global increased prices.

He said that in this regard US Pakistan Green Alliance aims at reducing greenhouse emission. Basically US mission wants to encourage entrepreneurs to look at the enormous untapped potential of trade between Pakistan and USA where the priority areas would be IT, agriculture and energy sector. He said that Pakistan’s infrastructural challenges hindering regional trade and floods have damaged the infrastructure. US has provided more than 200 million USD for assistance and reconstruction of flood affectees as these are difficult times for Pakistani people. He said that Pakistan needs fundamental economic reforms in order to encourage new investment. US mission in Pakistan has also accompanied a delegation of Pakistani IT companies who participated in a show in Las Vegas.

The Ambassador said that US mission wants all members of the society to equally participate in the economic activities and inclusion of women entrepreneurs in LCCI is encouraging. out mission is supporting women entrepreneurs through accredited exchange programs and offering opportunities to women in energy sector. He said that IMF works on a policy framework which is though and US is large stakeholder but there are other members also. We want to see Pakistan have a sustainable budget to put on a sound economic system. He said that IMF is generally flexible and is able to incorporate in times of troubles.

LCCI President Kashif Anwar said that Pakistan and USA have excellent diplomatic relations that started soon after the independence of Pakistan in 1947. Both countries celebrated 75th Anniversary of diplomatic relations last year and we look forward to maintaining these cordial relations. He said that we really value the compassions of US nationals for Pakistan who regularly contribute for various projects being undertaken by USAID in our country that are related to SMEs, energy sector, social sector, education, healthcare facilities and empowering young entrepreneurs especially women.

Kashif Anwar said that the devastating floods of 2022 affected 33 million people in Pakistan and more than 1,700 people lost their lives. The total economic losses are estimated to be over 30 billion dollars. He said that at present, Pakistan is going through the hard times. We are looking up towards friends of Pakistan especially USA for some immediate assistance to put economy of Pakistan on track. The LCCI President said that the current foreign exchange crisis has forced restrictions on the ability of banks to open LCs. Shipping containers are stuck at Ports which are creating threats to the supply chain of manufacturing and industrial sectors. We need the support of Multilateral Agencies to tide over this difficult time.

He added that the present scenario requires some concrete policy actions on urgent basis. Government should immediately declare all the Ports as Bonds to save businesses from port storage charges. Considering these times of grave economic challenges, we would request the US Mission in Pakistan to play a role in convincing the shipping lines operating in Pakistan to waive off their demurrage and detention charges.

“We are of the view that import substitution through Industrialization should be the top most priority, followed by enhancing exports to manage our trade & current account deficits. The Government has to come up with a concrete strategy of import substitution so that we are able to expand our manufacturing base and decrease our reliance on imports. This can become possible through exchange of technology and digitized m-commerce agreements between US and Pakistan”, he added.

He said that the energy production must be enhanced from renewable sources to curtail our import bill. There is need for construction of dams and water reservoirs with the support of USAID. This would help prevent floods, ensure water availability for agriculture purpose and save Pakistan from becoming a water scarce country. Rain water harvesting through building new lakes and flood water channeling with the help of US assistance can prove very beneficial.

The LCCI President said that according to the State Bank of Pakistan data, Pakistan’s exports to US were 6.8 Billion Dollars in 2021-22 while the imports were around 3 Billion Dollars. It is worth mentioning that our exports to US are basically dominated by Textiles. He further stated that both countries signed a Trade and Investment Framework Agreement in 2003. It is a high time to move towards a Free Trade Agreement which would provide us greater market access and enable Pakistan to take its exports beyond 10 Billion Dollars to the US.