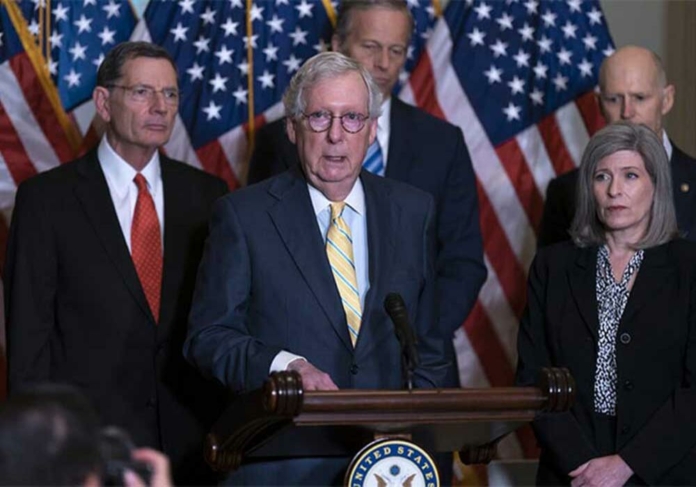 US senate on Thursday approves $12 billion for Economic and military aid for Ukraine to fight the Russian invasion as part of the stopgap funding bill.

Joe Biden while showing his support to Kyiv said “I want to be very clear about this, [the] the United States will never, never, never recognize Russia’s claims on Ukraine sovereign territory,” as per an Aljazeera report.

The bill, approved by senators from both parties, includes $3 billion for arms, supplies, and wages for Ukraine’s troops, as well as authority for President Joe Biden to direct the US Defense Department to send $3.7 billion in arms and equipment to Ukraine.

The legislation, which was cleared by a 72-25 vote in the Senate on Thursday, is expected to pass in the House before reaching President Joe Biden’s office, as cited by the report.
It also gives $4.5 billion for Kyiv to keep the economy steady and the government running, as per the report.

Senate Majority Leader, Chuck Schumer, Stated that “Seven months since the conflict began, it’s crystal clear that American assistance has gone a long way to helping the Ukrainian people resist Putin’s evil, vicious aggression,” as per a Reuters report. He further said that the US must continue to support brave Ukrainians.

According to a bill summary, the legislation would appropriate $35 million “to prepare for and respond to potential nuclear and radiological incidents in Ukraine,” as Putin hinted at the use of the nuclear weapon.
Moreover, US officials have also promised to implement new sanctions on Russia if the annexation goes ahead.

Earlier in May, congress approves $40 billion for Kyiv to respond to Russia. According to the Aljazeera report, some right-wing legislators are also criticizing US’s massive support for Ukraine. “Ukraine aid is turning into a monthly subscription cost for the United States; there must be limits and oversight with American taxpayer dollars.” Republican Congressman Andy Biggs tweeted.