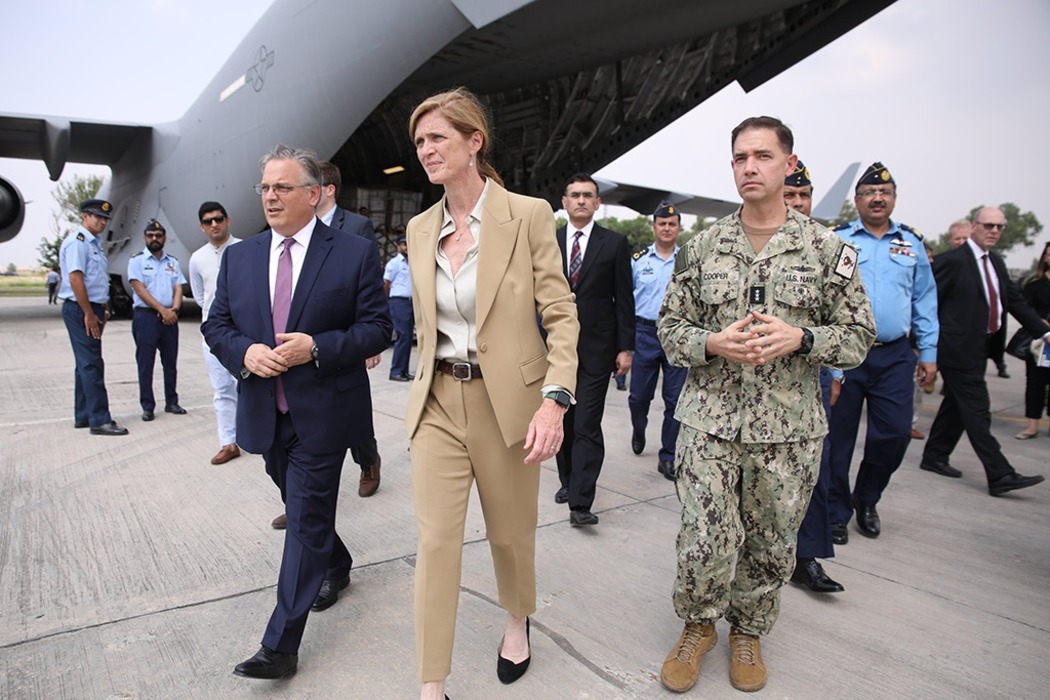 United States Central Command, in support of the US Agency for International Development (USAID), on Friday began airlifting life-saving humanitarian supplies to support people and communities affected by severe flooding in Pakistan, US Embassy said in a press release.

The supplies include nearly $2.2 million worth of essential life support resources, including food preparation and shelter materials, which will be delivered over the course of the coming days in approximately 20 different shipments across the country. “The United States remains deeply saddened by the devastation caused by the catastrophic flooding throughout Pakistan,” the statement reads.

“Our humanitarian donations are prioritizing urgently needed food, nutrition, multi-purpose cash, safe drinking water, improved sanitation and hygiene, and shelter assistance. This support will save lives and reduce suffering among the most vulnerable affected communities,” the press release said, adding that the country would continue to monitor the crisis in close coordination with local partners and Pakistani authorities.

US Agency for International Development (USAID) Administrator Samantha Power on Friday announced that the United States, through the USAID, extended an additional US$20 million in humanitarian assistance to support the people affected by severe flooding in Pakistan. Pakistan was ravaged by heavy monsoon rains, as well as landslides and glacial lake outburst floods that have been ongoing since June, the USAID Administrator said.

“The impact of these floods has been felt widely across Pakistan. An estimated 33 million people have been affected, nearly 1,400 have died, and more than 12,700 have been injured. Infrastructure in the flooding’s path has been decimated, with more than 1.7 million homes, an estimated 13.8 million acres of cropland, thousands of miles of road and hundreds of bridges damaged or destroyed,” she said here in a press briefing.

Power said this support was built on an announcement last week of US$30 million in humanitarian assistance to help the people of Pakistan affected by these devastating floods. Since August 12, the United States has provided over US$50.1 million in disaster assistance to help the people of Pakistan. “With these additional funds, USAID partners will continue to provide emergency relief supplies, multi-purpose cash and shelter assistance, support for livelihoods, logistics, and humanitarian response coordination systems. USAID will also prioritize water, sanitation, and hygiene (WASH) assistance as a preventative measure to mitigate the anticipated spread of waterborne diseases.”

USAID has also deployed a Disaster Assistance Response Team (DART) to lead the US government’s humanitarian response efforts in Pakistan. This elite team, composed of disaster experts from USAID, is assessing the damage, identifying priority needs, and coordinating with the Government of Pakistan and humanitarian partners. The United States is the single largest humanitarian donor to Pakistan. US Ambassador Donald Blome on the occasion said the worst flood has occurred in Pakistan “Our sympathies are with the people of Pakistan”, he added

“The United States is deeply saddened for the flood victims and the loss of loved ones, livelihoods, and homes throughout Pakistan. We stand with communities in Pakistan during this difficult time and will continue to help them in this time of need.” He said the US stood with Pakistan in this difficult time adding that American companies had sent millions of dollars in aid. Blome said total of US$30 million in aid was being given to Pakistan, food and other essential items were being provided to flood affected people.

Meanwhile, the prime minister thanked Power for the humanitarian relief assistance extended by the US in the wake of floods. He said her visit at the time, when Pakistan was battling the immediate effects of devastation by super floods was an expression of the US government’s solidarity with its people. He apprised her of the scale of destruction Pakistan had suffered; death toll of more than 1,300; over 33 million people displaced; four million acres of crops destroyed; 800,000 livestock perished, entire villages and livelihoods swept away and infrastructure losses.

The government was using all resources available for rescue and immediate relief operations, however, food insecurity and rehabilitation would be major challenges that would follow, he added. The prime minister stressed that owing to the sheer magnitude and intensity of the crisis, Pakistan was unable to meet the short-term or long-term challenges on its own. He emphasized that continued international support, solidarity, and assistance would be required and sought the US support in mobilizing the international community.

Also, Foreign Minister Bilawal Bhutto Zardari on Friday said that despite government’s full engagement with rescue and relief efforts, continued international support, solidarity, and assistance was required for Pakistan to respond to the devastating impact of the floods. The foreign minister, in a meeting with Administrator of USAID Samantha Power said he looked forward to Pakistan and US building extensive engagement on climate change and on tools of climate resilience.