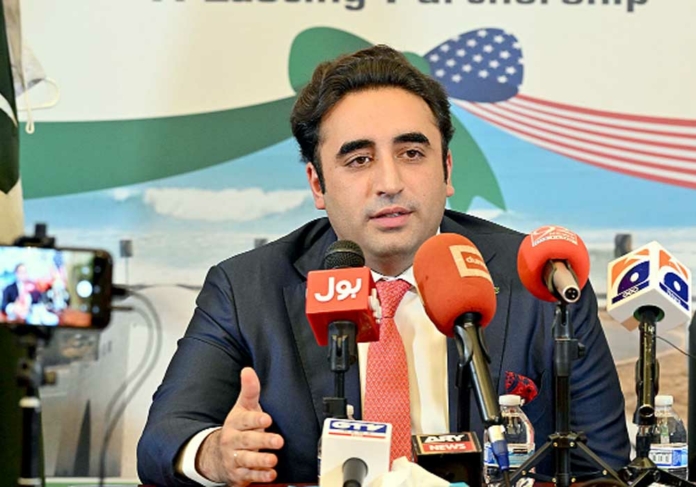 Foreign Minister Bilawal Bhutto-Zardari said on Thursday that his visit to the US was fruitful, purpose of which was to help the flood victims in Pakistan.

He claimed that today’s Pakistan clearly different from what it was six months ago. He also claimed that a lot of work has to be done for the flood-affected. “At this critical time, the demand for pre-elections is like playing with the lives of the flood victims,” he said, addressing a press conference in Washington on Thursday. “The top priority is to aid flood victims; politics is a distant second. Nothing that we do for the flood evacuees is adequate.” He said the United Nations Secretary-General put the flood issue on top of the agenda during the UN session. He expressed gratitude to the world community for the help they offered to Pakistan for the flood victims.

The minister said, “We have not reached the stage of reconstruction and rebuilding. We are still in the phase of relief and rescue.” “You must have witnessed improvement in the country’s foreign affairs during the six months of our government. Also, you must witness a clear difference between today’s Pakistan and what it was six months ago,” Bilawal noted. He said that Pakistan faces shortage of food as crops have been destroyed by floods. Pakistan faced massive flooding right after the country inked an agreement with the IMF, he said.

The COVID-19 pandemic and the Ukraine war have triggered price hike around the globe, he said. Bilawal said, “Besides floods, our agenda was to improve relations with the US. The visit to the US was successful.” Both the countries are expected to make further progress in trade, agriculture, health and other sectors, he said. He suggested that India and Pakistan work together on climate change issues. The world would suffer if there is no agreement on climate change issues, he warned.

Bilawal said the ten biggest countries affected by climate change will have to raise their voices together. He proposed to the world to work together as it is the only solution to the climate change problem. He also criticised PTI Chairman Imran Khan, saying the PTI leader has damaged the foreign policy and economy of the country, said the foreign minister. However, Pakistan is back on the right track, he said, thanking God.

“It would be unfair if Asad Majid [Pakistan’s ex-envoy to the US when the cipher was delivered] was penalised for a wrong committed by Imran Khan,” he said. Asad Majid is fulfilling his responsibilities, he said.

Also, in a meeting with Senator James Risch, Ranking Member Senate Foreign Relations Committee, Bilawal highlighted the ongoing devastating impact of the floods in Pakistan which resulted in more than one-third of the country being submerged in water. Appreciating the $66.1 million US assistance, he said “Pakistan needs much more as initial estimates indicate damages of more than $30 billion.” The Foreign Minister underscored the challenges being faced by the affected population, including impending health catastrophes, particularly outbreaks of malaria, dengue and water-borne diseases in the affected population, food insecurity and more.

He emphasized Pakistan was a victim of climate change despite being minimally responsible for greenhouse emissions. Pakistan was committed to building back better and greener climate resilient infrastructure but the scale of the calamity necessitated international support. Bilawal said the US Congress had historically stood by Pakistan in natural disasters and urged continuing cooperation. Referring to “people in waist-deep waters searching for signs of their devastated towns”, the Senator empathised with the Foreign Minister on the devastation wreaked by the floods. Both sides also discussed regional issues, including the need for a peaceful, stable Afghanistan. The Foreign Minister invited the Senator to visit Pakistan to witness the first-hand impact of the floods.

In a meeting with Senator Robert Menendez, Chairman US Senate Foreign Relations Committee in Washington DC, Bilawal lauded the United States’ assistance for flood relief, saying that the magnitude of the disaster necessitated sustained and long-term cooperation. He urged Chairman Menendez’s personal leadership in mobilising support in the US Congress, which historically had stood by the people of Pakistan during such natural disasters. The Foreign Minister said that the flood crisis provided an opportunity to Pakistan to build back better, greener and resilient infrastructure.