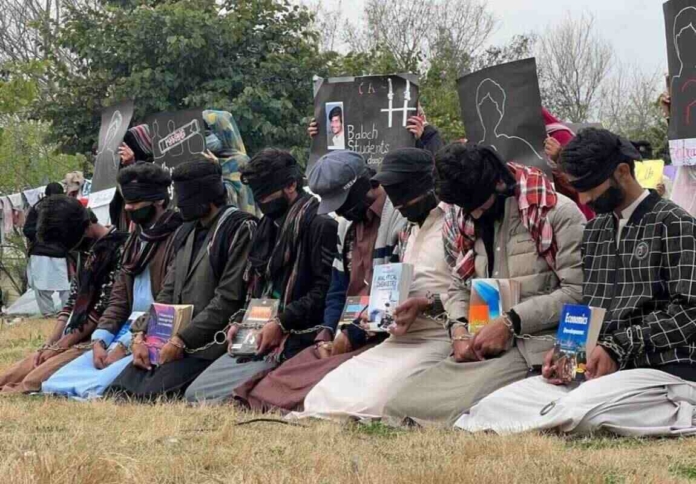 The Baloch Students Council (Islamabad) organised a silent peace walk outside the National Press Club (NPC) in Islamabad on Sunday against the ‘enforced disappearance’ of their fellow student, Hafeez Baloch, and harassment of Baloch students in educational institutions of the federal capital and Punjab.

Hafeez Baloch, who was doing his MPhil in physics from the Quaid-i-Azam University Islamabad, was forcibly disappeared in broad daylight when he was teaching in an academy in his hometown Khuzdar, eyewitnesses alleged. His fellows in Islamabad say that Hafeez was a poor student who went to his hometown during vacations to teach in the academy to get some funds for the coming year.

Baloch students from Islamabad have been protesting peacefully in Islamabad for more than a week. After several days of sit-in and demonstrations in the federal capital bearing no fruit, they announced a silent symbolic peace walk where students blindfolded themselves and chained their hands. Other students stood in lines with different placards in their hands, calling for an end to the harassment of Baloch students.

Addressing the gathering, the students said that the protest was not just for one Baloch student but all those studying in different varsities of Punjab. They claimed that “the Baloch students were being systemically harassed under a pre-planned programme in the form of profiling. Hafeez Baloch is also the victim of the same profiling which is now being introduced in institutions of Punjab as well.”

The students said that after Hafeez Baloch was disappeared, his family went to the police station for compiling an FIR, but they refused. “If we are also the citizens of this country, why aren’t we being treated the way other citizens are,” the Baloch students questioned. They added that when they followed the legal and constitutional procedure of protest, they were baton-charged by the police. “When we, the Baloch students, asked to be allowed to sit peacefully in our classes, we were charged for treason,” they addressed.

They said that other than issuing some statements, the government did not respond to their grievances after which they had decided to organise the peace walk. They said that the purpose of holding the peace walk was to convey a message to the rulers that when they (the students) raised their voices, they were charged with treason.

After their peace walk, the students returned to their token hunger strike camp. “Despite heavy rain, cold weather and continuous harassment of Islamabad administration, Baloch students are committed to sitting [in the camp] against harassment and disappearance of Hafeez Baloch,” said BSC Islamabad.