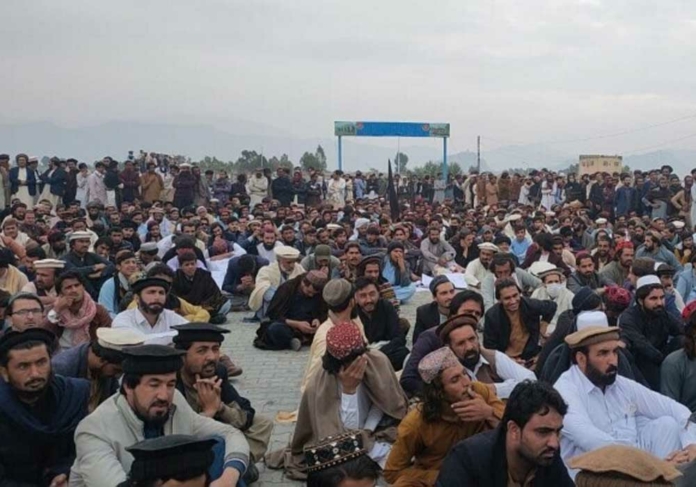 Hundreds of people in South Waziristan’s Wana district took to the streets on Sunday against the recent wave of terrorism in the region, demanding civil administration fulfil its responsibilities to restore peace in the area.

The huge gathering titled “peace march” was organised by Wana Siyasi Ittihad (WSI). Holding black flags, participants of the rally marched from the Wana Bazar and converged near the Javid Sultan camps. The demonstration was also attended by members of the Pakistan Tehreek-e-Insaf (PTI), Jamaat-e-Islami and other political parties.

The protesters demanded banning armed groups in the district, tackling the rise of terrorism, getting rid of kidnappings for ransom, releasing parliamentarian Ali Wazir – who has been incarcerated for the past two years – and providing adequate security for the public, contractors and traders. WSI member Saeed Wazir said that a contractor namely Tariq Wazir was abducted from a market in the region a week ago by “unidentified persons”. “Tariq Wazir should be recovered immediately,” he demanded.

Saeed urged the civil administration to fulfil its responsibilities to maintain peace and order in the area. “The police system should be strengthened and its powers and privileges should be increased.” He also said that no government representatives had yet made efforts to negotiate with the protesters, warning that if the authorities failed to fulfil their demands, another protest would be staged on November 20.

Last month, thousands of people in KP took to the streets to show their resolve against terrorism after a school van in Charbagh came under gunfire, leaving the driver dead and two children injured. At least 15 students were inside the vehicle at the time of the attack. The attack had come just a day after the 10th anniversary of the shooting of Nobel laureate Malala Yousafzai by the TTP when she was a schoolgirl.