We have to finally start worrying about future of Pakistan: Miftah Ismail at thinkfest 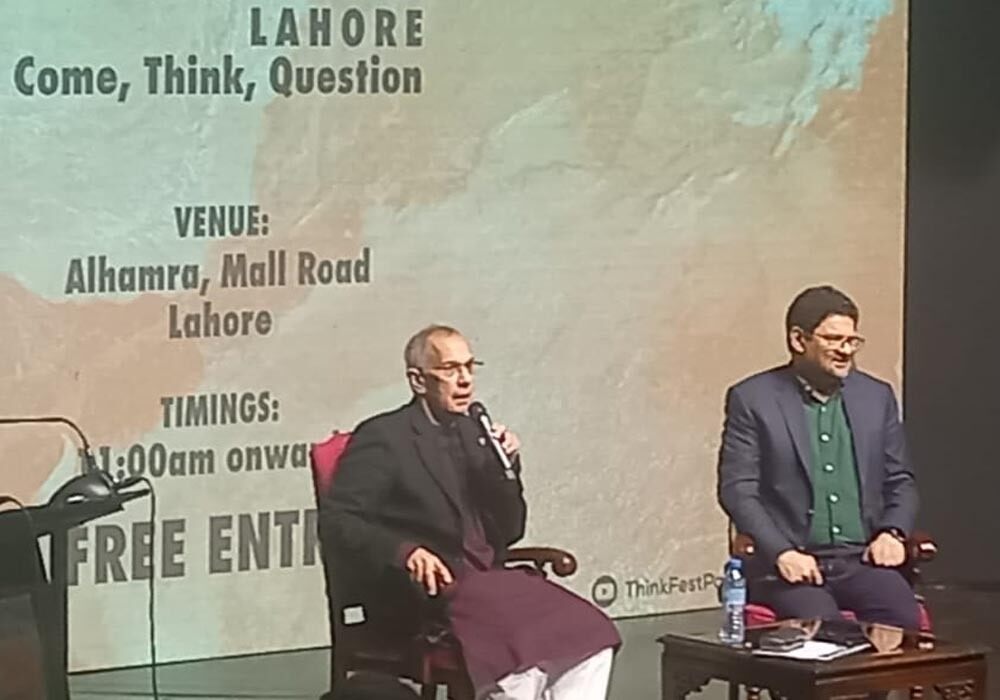 Pakistan’s Political economy is continuously declining and it is the need of the hour to find ways to hold its reins to create stability in the nation.

To figure out ways to excel in Pakistan’s political economy, Thinkfest 2023 held a panel discussion between the former finance minister and PMLN leader Miftah Ismail and director of IBA Karachi S Akbar Zaidi.

S Akbar Zaidi asked Miftah Ismail about the future of Pakistan and PMLN while stating, “The ruling party has destroyed the country, economy, and even PMLN. If the election happens in the coming days, you guys have no future.”

He added that the condition of Pakistan when I got the ministry was cruel but when I was removed from my position it was better.

Miftah said, “When in PTI government Hafeez Sheikh made an agreement with IMF, economies were in a difficult state but in Covid, IMF soften its policies and gave Pakistan $ 1.5 billion which could not be even sterilized. IMF loaned money to the government instead of the state bank so, this was an opportunity for PTI Government which they wasted.”

He emphasized that due to wasting that opportunity PTI had to go back to the traditional way of running the economy and started giving the largest subsidy possible to the richest Pakistanis.

PMLN leader said, “When Hafeez Sheikh was able to get a loan from IMF they fired him and give the ministry to Shaukat Tareen who gave a new budget not thinking that this might lead to a current account deficit problem, and last year we did 17 billion deficit.”

“This is the same old pattern, every time a government leaves they spend money irresponsibly leading to a deficit,” he urged.

“Only in last year, we paid a thousand and 72 billion to the power ministry. We produce expensive power but we have the worst distribution and bill collection system in the world. Even today we only collect 83% of bills which means 17% are getting electricity but not paying bills and somebody has to pay for them. So, the rest 2/3rd people have to pay for 1/3rd who are not paying.”

He said that PTI broke another agreement with IMF so when PMLN hold the reins of government it had to pay 120 billion for petroleum and diesel subsidy.

He added, “Running a govt takes 40 billion rupees and we were paying 4x more to only petroleum.”

He said, “I insisted on increasing petrol price when the KSA minister told me that they are charging more for petroleum than Pakistan. After which IMF come and agreed to give a loan but then they fired me.”

He said, I wanted to impose a tax on retail as well but I was not allowed to.

“I don’t see our economy getting better at all. I don’t think there has been any change in policies all we always do is take loans and impose tariffs,” Zaidi added.

“You are part of the problem as well you belong to the political elite and if you become finance minister again we are going back to the IMF which is not working,” he said.

Miftah said I completely agree that Pakistan is not working and it’s completely our fault.

“If you have half of the children not in schools, if you have 40% of children stunted and 18% wasted and rest malnutrition this means Pakistan is not working. Only 14-16% of children are able to get an education. That’s our reality,” Miftah said.

He said that 55 lac children are being born in Pakistan which is more than even established states.

“We have the worst governance in the whole world,” Miftah said.

“That is why other states are surpassing Pakistan which means Pakistan has a problem that is Pakistan has an elite-dominated society,” the former finance minister said.

He said Pakistan is elite dominated to the extent that every domain of Pakistan is being controlled by elites.

He also said that politics in Pakistan is based on family values and interests and those who talk about dynasties are monarchs.

“We had the same exports as Vietnam in 1992 and now they have even surpassed us,” Miftah said.

Zaidi further inquired, Pakistan is in a serious decline in every field due to the elite so whenever the election happens these same people are going to come back.

“One way to stop this is to get rid of these elites or to have an economic collapse,” Zaidi said.

Zaidi said, “You talked about learning from other states so let’s reduce our army by 1/3rd cause that’s what sir Lanka announced yesterday.”

He urged that unless we tackle the problem that who controls resources we are screwed again.

In response to this Miftah said that Army ingress had not been healthy for the state. Other than that politicians had also been looking behind their shoulders.

Miftah while talking about the preferences of politicians said, “You can see that economy is on the verge of collapse, and in Punjab, we are playing no confidence game.”

He urged that we need to redefine strategies.

“I think federalism is incomplete in Pakistan. In NFC awards provinces got a lot of money but they have the worst possible governance. If a province is spending then they have to collect tax as well,” Miftah said.

S Akbar Zaidi then asked that all the problems you are listing here, we all are well aware of these problems but the real question is who is going to solve them no matter who holds the reins whether it is PMLN, PPP, or PTI the problems are there and all parties have same solutions to it, so where is the change.

Miftah said, “I completely agree that we need to change the wholesale structure of Pakistan. We need a revolution, not like the Iranian one but even decreasing armies influence will be a radical change.”

To which Zaidi asked, “Who is stopping you from making these reforms?”

Miftah replied, “Do you think this is the priority of Politicians?”

Miftah added, there must be a coalition of students and farmers, etc. to think about themselves rather than elites.

IBA director said, “Pakistan can’t excel like that every time we are in a problem there is either IMF, KSA, UAE, or another state to help but we never do anything on our own. People are not paying tax so, so here I am talking about land reforms, etc. so for all these reforms who is stopping you? The army is not stopping you right?”

Miftah said, “I agree we need a lot of these reforms, especially agriculture reforms.”

He added, “I think that dividing Pakistan into small districts and letting them compete might be a solution.”

He quoted Charles’s theory “people vote with their feet” and said, “Ask districts to collect property tax and fund them on basics of performance which will make them work on their districts and divisions and let them compete.”

To which Zaidi again asked, “Who is stopping you from doing all of this?”