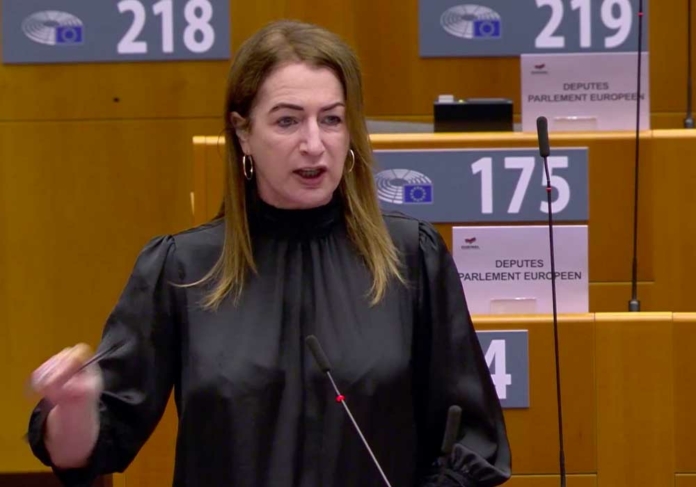 European Parliament member (MEP) from Dublin Clare Daly has remarked that she finds it laughable that those calling for arms to Ukraine never do so for the Palestinian or Yemeni people.

In a session of the European Parliament, two Irish MEPs voted against a motion to condemn the latest Russian escalation in Ukraine.

The resolution condemned the recent Russian annexation of Ukrainian regions and called for harsher sanctions on Russia and increased military support for Ukraine.

The two MEPs were Mick Wallace and Clare Daly, with the latter taking to the podium to express her views against the motion.

In her speech, Daly said that such actions were only escalating the Ukraine-Russia war, “whereas we must work to end the war by opposing it, which we are not doing”.

She said that opposing war in Ukraine was not anti-European or anti-Ukrainian or pro-Russian, adding that this was common sense.

She went on to say that those who tried to oppose the war were labeled as “traitors”, “cronies”, “Putin puppets”, “Kremlin stooges”, and “agents” by mainstream EU states, which she described as “pathetic”.

She also quoted Nazi German leader and propagandist Herman Goring to explain that people did not want war and they were just brought to war with smears and threats, “All you have to do is tell a nation that they are being attacked, denounce the pacifists for lack of patriotism, and expose their country to danger.”

Clare further on said that European Parliament should be ashamed for bashing those who opposed war, by twisting their words and subverting their meanings.

She further criticized the resolution’s supporters by saying that those who call for arms for Ukraine never called for arms for the people of Palestine or Yemen.

Daly also provided a written explanation of her vote to parliament, emphasizing her opposition to all forms of war.