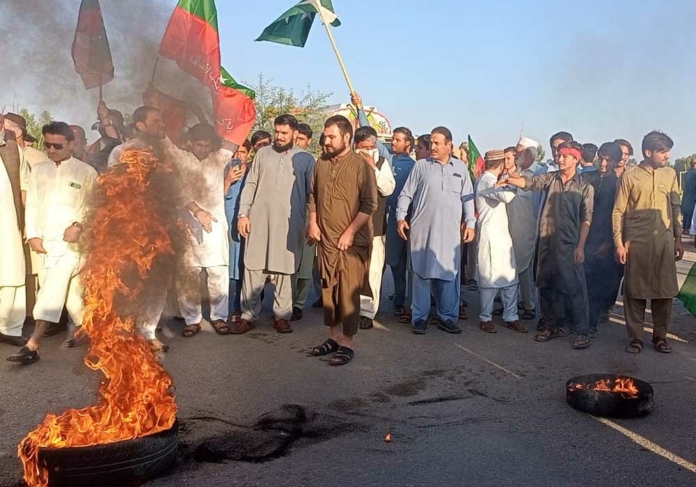 Widespread protest demonstrations have started in parts of the country against Pakistan Tehreek-e-Insaf (PTI) chief Imran Khan’s disqualification in the Toshakhana reference, blocking motorways, national highways, and key arteries and chowks in all major cities.

Protest demonstrations continued in Rawalpindi, Karachi, Lahore, Faisalabad, and other cities where thousands of workers have reportedly gathered to express anger over the decision. TV screens show images and video clips of tires burning and smoke on main roads.

Protestors tried to block the Faizabad interchange on the motorway, but the authorities used tear gas and rubber shelling to disperse them. In Lahore, they blocked the Jail Road for traffic and held sit-ins at the city’s exit and entry points in Shahdarah, Thoker Niaz Baig, and Chungi Amar Siddhu.

PTI Lahore President Hammad Azhar announced on Twitter minutes after the verdict that the PTI would hold a massive protest in the city. Protests continued till the filing of this report.

On the other hand, the PTI leadership rejected the verdict, declaring it shameful. They announced that the ECP decision would be challenged in the high court.

PTI Vice Chairman Shah Mahmood Qureshi said when the conspiracy to politically eliminate Khan fired back, “they” sought the help of the ECP, whose partiality was already in question, and went to disqualify the most popular leader in the country.

“The ECP was not entitled to listen to the case. We will never accept its decision. Imran Khan is still our chairman and he will continue serving in the same post,” he said.

He said Senator Ali Zafar was given the responsibility to prepare the petition and that the verdict would be challenged today in Islamabad High Court. Before the verdict, he said, he and other leaders held a press conference and tried to inform the ECP about the legal and political implications, but the electoral watchdog acted against their power. “Now the consequences are visible and the entire country is blocked,” he said.

“I’m making it clear we will never accept the minus one formula,” said Asad Umar, announcing a challenge of the decision in the high court as soon as a copy of the order is received. He said the PTI was already expecting the same verdict.

“We had no hope of anything good from [them]. The ECP did exactly what we expected of them,” said PTI leader Fawad Chaudhry while talking to reporters outside the office of the ECP. He said the cases of PML-N leader Nawaz Sharif and PPP Chairman Asif Ali Zardari were not being heard in the ECP but the electoral watchdog made Imran Khan its target.

“Can they disqualify 22 crore people of Pakistan by disqualifying Imran Khan?” he said and asked the masses to come out of their homes and hold a protest demonstration. “It is the beginning of the revolution,” he said.

The masses, he said, must come out of their homes to protect the constitution as, according to him, the decision was not against Khan but an attack on the people.

“Imran Khan won by a two-thirds majority just a week ago and who are you to decide?” asked Chaudhry.

PTI leader Shafqat Mahmood took to Twitter and criticized the verdict against the PTI chief, calling it “a black day for Pakistan.”

“Condemnable decision by ECP to disqualify Imran Khan, history will remember this commission as anti-people and a handmaiden of looters and plunderers. Black day for Pakistan,” said Mahmood.

“Imran Khan is the name of an honest and trustworthy person. Today, the person who ruled the hearts of crores was deposed. It was known that a compromised EC [election commission] would give this decision,” the PTI leader said in a tweet.

“We have said this before that Imran Khan is our red line and today you have crossed that red line,” he added.

PTI leaders Ijaz Chaudhry, Shehbaz Gill, Dr. Yasmin Rashid, and others have also strongly reacted to the disqualification of their chairman in TV talks and through tweets.

Senator Chaudhry, Andleeb Abbas, Ijaz Ch, and others held a protest rally in Islamabad and chanted slogans against the government and the ECP. They claimed the PDM dictated the decision to the commission.