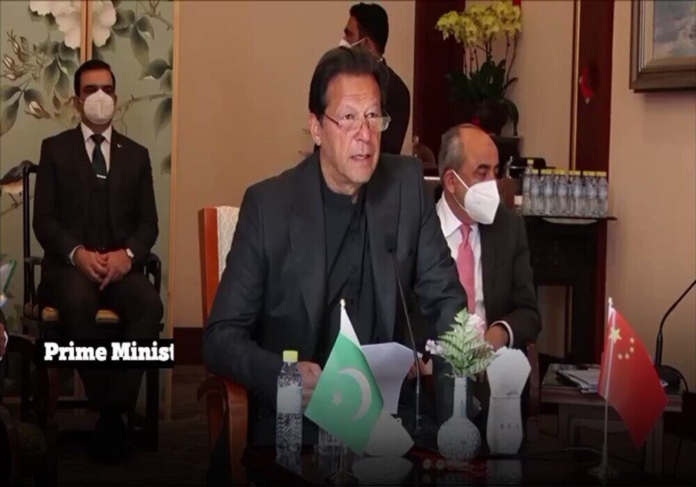 Prime Minister Imran Khan on Friday reiterated Pakistan’s stance that the key driver in international politics should be cooperation, rather than confrontation, as the world did not need another Cold War.

“In view of myriad global challenges, the world does not need another Cold War. Divisions can result in mounting sufferings and prevent common benefits,” he said in an exclusive session with heads and representatives of leading Chinese think tanks, universities and Pakistan study centres during his four-day visit to China. Imran recalled that Pakistan in the past had played a role in building bridges and was ready to do so again.

Referring to Pakistan’s National Security Policy, he stressed that his government put economic security at its core. This vision was built upon connectivity and development partnership for which China remained an indispensable partner for Pakistan, he added.

During the session, the prime minister emphasised the importance of Pakistan-China relationship, and ensuring regional stability and prosperity.

He highlighted the two countries’ common position on multilateral forums, and reaffirmed Pakistan’s firm commitment to One-China policy and other issues of core interests.

The prime minister also thanked China for its unwavering support on the Jammu and Kashmir dispute. He spoke about the importance of Pakistan-China ties in ensuring regional stability and prosperity.

Reaffirming Pakistan’s all-weather strategic partnership with China, the prime minister highlighted the importance of CPEC as a flagship project of President Xi Jinping’s Belt and Road Initiative. He emphasised that while Phase-I of the CPEC was focused on infrastructure development and connectivity, the next phase would focus on industrialisation, cooperation in information technology and agricultural transformation.

The prime minister highlighted that Pakistan was offering incentives for investment that were on a par with or better than other investment destinations.

Discussing the regional dynamics, he said he believed that it was in the mutual interest of Pakistan and China to cooperate in ensuring peace and security in Afghanistan. He urged the international community not to abandon Afghans in the time of need. He underlined the importance of Pakistan and China working with Afghanistan to advance shared objectives of peace, development and connectivity.

Prime Minister Imran Khan pointed to India’s aggressive behaviour and the prevailing Hindutva ideology as a threat to regional peace and a cause of lingering regional instability.

He said the world must pay attention to India’s continued atrocities and oppression against the people in Indian Illegally Occupied Jammu and Kashmir (IIOJK).

He stressed the need for further strengthening people-to-people contacts, including cultural and academic linkages between think tanks, universities and research institutions of Pakistan and China. He also called for greater efforts for joint research and intellectual dialogue to better appreciate the common threats and opportunities facing the two countries.

Separately, in a virtual meeting with He Lifeng, Chairman of China’s National Development and Reform Commission (NDRC) and Vice Chairman of the Chinese People’s Political Consultative Conference in Beijing, Imran Khan said the CPEC had strategic significance for both the countries and that the project was delivering tangible benefits. He noted with satisfaction that CPEC’s early-harvest projects had transformed Pakistan’s economic landscape, thus laying a solid foundation for sustainable economic growth.

He said both sides would continue expediting efforts to achieve Gwadar’s potential as a hub of regional commerce and industry, while also prioritising preparatory work on the ML-1 and other key energy projects.

During the meeting, both sides reviewed the progress of ongoing CPEC projects and discussed the preparations for future initiatives. The NDRC chairman said that China attached immense significance to CPEC and was firmly committed to its steady progress and development.

He noted that China had become Pakistan’s largest investment and trade partner in the last seven years and both sides were keen to maintain the momentum of overall economic and trade ties in the future. Thanking the prime minister for his firm support, He Lifeng expressed China’s readiness to assist Pakistan in the areas of industrialisation, agricultural modernisation, science and technology and socioeconomic development.

Separately, the prime minister, during a series of meetings with the executives of Chinese state-owned and private corporate sectors, invited Chinese companies to invest in Pakistan and benefit from the business-friendly policies of the government.

He said Pakistan was offering conducive environment for investment in special economic zones (SEZs) under the CPEC.

The corporate leaders briefed the premier on the progress of their on-going projects in Pakistan. They evinced keen interest in expanding investments in Pakistan in projects related to recycling of metals and paper, energy, textile, fibre optics networks, housing, dairy and water management. The prime minister was joined in the meetings by federal ministers, advisers and senior officials. Special Assistant to the Prime Minister on CPEC Khalid Mansoor, who is accompanying the prime minister during his China visit, told the media that Chinese companies had expressed the desire to establish a $3.5 billion reprocessing park in Gwadar and a $350 million textile cluster near Lahore. He said a consortium of three Chinese companies had vowed to build a metal and paper reprocessing park in Gwadar within two to three years.