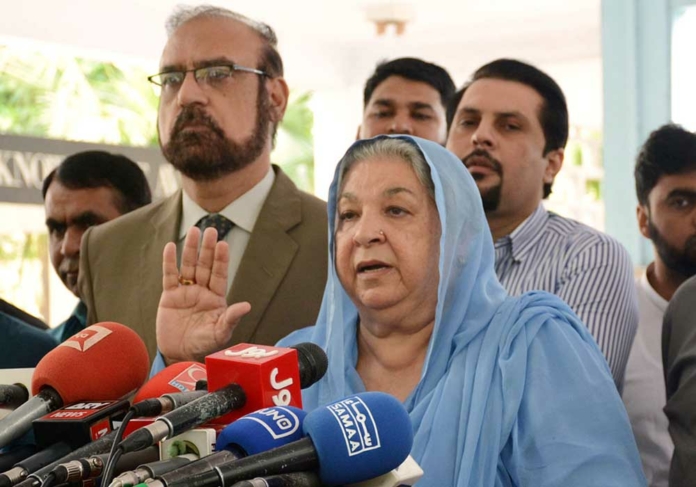 Heated words were exchanged between the health minister and woman lawmakers of PML-N. As per reports, Yasmin Rashid was responding to the queries of lawmakers related to the health department when she talked about Maryam Nawaz, which incited the PML-N lawmakers. Appreciating the Sehat Insaf card, Dr Yasmin said that millions of people are getting benefit from the health card but it is really unfortunate that Maryam Nawaz tried to halt this project.

“There was an audio in which Maryam Nawaz talked to stop the health card despite the fact that poor people are getting benefit from it,” health minister said. These remarks incited the woman lawmakers of PML-N who stood on their seats while chanting slogans against the government. “I am asking about the health facilities for the heart patients but the health minister is talking about Maryam Nawaz. Why they are so much worried about Maryam Nawaz,” PML-N MPA Rabia Naseem Farooqi said. Another PML-N lawmaker Azma Bukhari also stood to chant slogans against the government.

The health minister should give explanation of the sad incident of Nishtar Hospital that happened just due to the negligence of the government, the PML-N MPAs said. “Nishtar Hospital Ki Lashon Ka Jawab Do” slogans were chanted in the House and the health minister was seen helpless. She wanted to respond but failed due to the noise created in the House by the PML-N lawmakers and Speaker had to intervene to normalize the situation. Earlier, the session of Punjab Assembly was started after the delay of more than two hours from its scheduled time with Speaker Sibtain Khan in the chair. The session was later adjourned to meet again on Wednesday afternoon on 26th October.

Meanwhile, a meeting of the assembly members of the Lahore Division was held at the Chief Minister’s Office under the chair of Punjab Chief Minister Chaudhry Parvez Elahi. Chief Minister Parvez Elahi discussed various suggestions with the assembly members for solving the problems of their constituencies. The CM assured the implementation of the recommendations and workable proposals of the members of the assembly for the development projects. The government was committed to serve the people by resolving their problems, he said, adding, the repair and maintenance of link roads would be completed on priority.

He said that measures would be taken for the upgradation and improvement of THQ hospitals and trauma centers would also be built for immediate medical assistance to the injured in accidents on the connecting roads. The CM also directed to extend the speedo bus route to Wafaqi Colony. Senior Minister Mian Aslam Iqbal, Provincial Ministers Mian Mehmood-ur-Rasheed, Murad Raas, Khurram Virk, Karamat Khokhar, members of national and provincial assemblies, commissioner Lahore, deputy commissioners, Police and other officers attended the meeting.

Also, a meeting of the assembly members of the Lahore Division was held in the Chief Minister’s Office under the chair of Chief Minister Punjab Chaudhry Parvez Elahi in which parliamentarians expressed their gratitude for PTI’s victory in the by-elections.