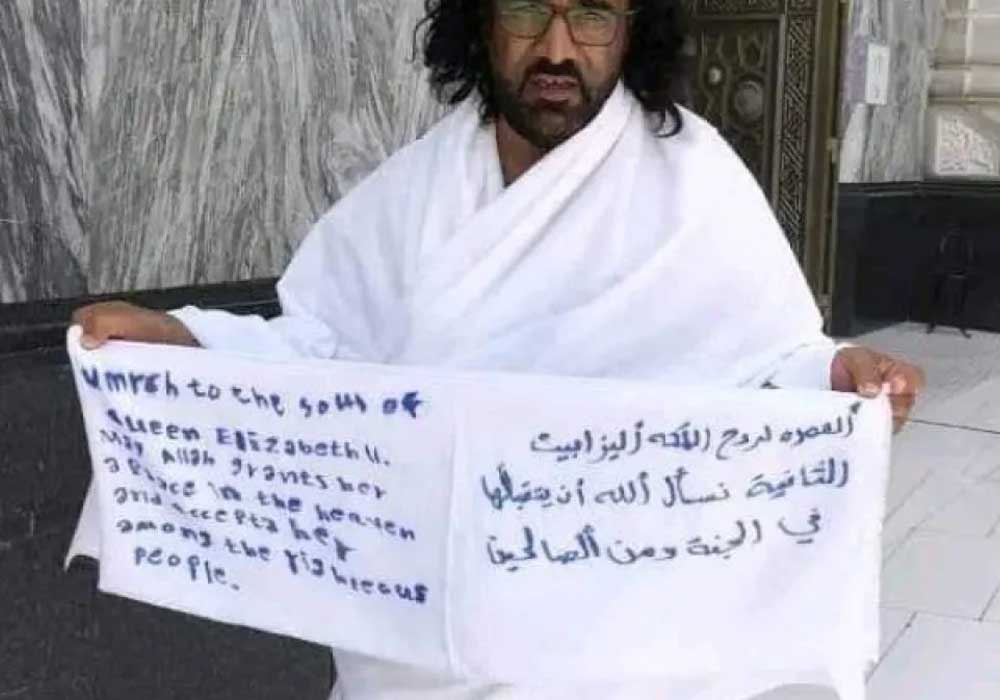 A Yemeni has been arrested by the Saudi authorities who announced that he had performed Umrah for the soul of late British Queen Elizabeth II.

The Saudi authorities announced the arrest of said Yemeni on Tuesday.

The Yemeni had sparked a controversy on social media. In his video, that appeared to be from the Grand Mosque of Mecca, he had announced that he had performed Umrah for comforting the soul of the late British Queen Elizabeth II.

According to media reports, the Yemeni had uploaded his video while performing Umrah and he was also holding a white banner saying that he had performed Umrah for comforting the soul of the late British Queen Elizabeth II.

The social media users had criticized upon the matter after which Saudi authorities had announced the arrest, according to report.

Saudi Arabia prohibits raising any political or sectarian slogans or banners while performing Umrah or Hajj.

The Yemeni national had violated the regulations and instructions for Umrah and therefore was arrested by the security of the Grand Mosque of Mecca, Saudi Security Agency announced in a statement on Twitter.

The Yemeni has been visible in the short video film on Twitter while holding a banner saying,” Umrah for the soul of Queen Elizabeth II, we ask God to accept her in heaven and among the righteous.”

The provisions of Islamic law do not permit to perform Hajj or Umrah in place of any non-Muslim.

Saudi social media users have also criticized the Yemeni. One user has said,” Abu Yemen, who wanted residency in London, deserves a residency in prison.”