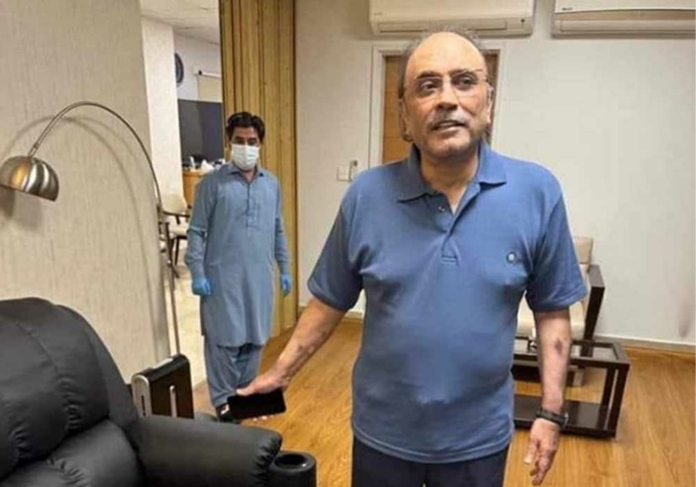 Pakistan People’s Party (PPP) Co-chairman and former President Asif Ali Zardari was discharged from a private hospital and was shifted back to Bilawal House after recovering from illness, his personal physician Dr Asim Hussain said on Sunday.

The former president was taken to a private hospital in Karachi on September 27 after his health deteriorated. “President Asif Zardari has recuperated from his illness and been discharged from hospital to go home,” Dr Hussain wrote on his Twitter handle. A team of foreign doctors on Tuesday examined the ailing former president at a private hospital in Karachi and expressed satisfaction over his ongoing treatment. The PPP leader’s daughter Aseefa Bhutto Zardari was present during the checkup by the three-member doctors’ team from Dubai. The doctors did not show any discontent with Zardari’s treatment, saying that currently the former president did not need to be shifted abroad.

Zardari’s daughter Bakhtawar had earlier revealed that her father was suffering from “post-Covid health concerns”. In a tweet, she had said that there was water near Zardari’s lungs for which she said that a procedure had been done a month ago. Bilawal Bhutto Zardari in his interview with German media had also confirmed the respiratory issues for his father and added after mild Covid symptoms he would have to rest for some days after being discharged from a private hospital.