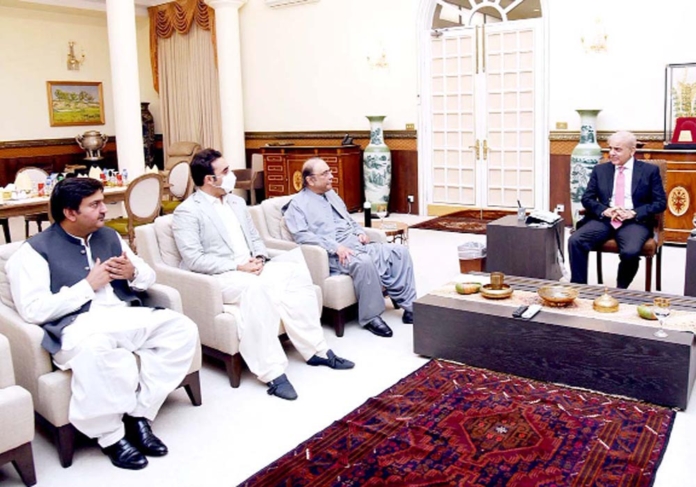 According to reports, the premier asked Zardari to address the concerns of allied parties. The former president assured the prime minister of full cooperation and said that their concerns will be addressed soon.

The meeting came after allies complained of lack of development funds during the National Assembly session on Monday, and said that the government was not fulfilling the promises made to them at the time of the no-confidence motion against former prime minister Imran Khan.

Aslam Bhootani and Khalid Magsi, both from Balochistan, as well as Osama Qadri from Sindh, said that the government had not allocated funds for their constituencies. They added that the allies were now being ignored.

“We joined the coalition out of respect for [Prime Minister] Shehbaz Sharif and [former president] Asif Zardari. But now, no one listens to us,” Bhootani said.

He added that during the previous government’s tenure, “we were not respected but we got funds”. “Now that their work is done,” Bhootani continued, referring to the success of the no-confidence vote, “the allies are forgotten”. He maintained that Zardari and Shehbaz “respect us but do not give us development funds”.

Earlier, PPP Information Secretary Faisal Kareem Kundi claimed that the PPP was only giving its advice to Prime Minister Shehbaz Sharif, while the decisions – financial or otherwise – were a prerogative of the government.

Talking to the media, Kundi said if the PPP – which is the second largest party in the coalition after the ruling PML-N – came to power at the Centre, only then it would make decisions of its choice.

“The PPP is limited to an advisory role only. The party gives advice when and where it is needed,” Kundi said. “The decisions are the prerogative of the prime minister and his party,” Kundi said, when asked why the PPP was not able to turn around the economy. Bhootani and Magsi had complained against Planning and Development Minister Ahsan Iqbal during a meeting with Shehbaz earlier in the day.

Meanwhile, Muttahida Qaumi Movement-Pakistan (MQM-P) MNA Sabir Qaimkhani Thursday said that the promises made to them before joining the coalition government are not being fulfilled and there is a possibility of secession from Sindh as well as the federation.

In an exclusive interview with a private television channel, Qaimkhani said that PPP is neither fulfilling its promises. “We are always open to reviewing the political alliance,” he added.

The MQM-P lawmaker said that it was a difficult step for the party to reach an agreement with the PPP. “There was a lot of opposition within the party ranks.”

Regarding delimitation, he said that the delimitation of Sindh is inappropriate and politically motivated. The defects are similar not only in local bodies but also in provincial constituencies. Qaimkhani added that the country runs on Karachi’s resources but the PPP does not want its sovereignty.

During the meeting, he informed the prime minister about the steps taken for the enhancement of investment in the country.