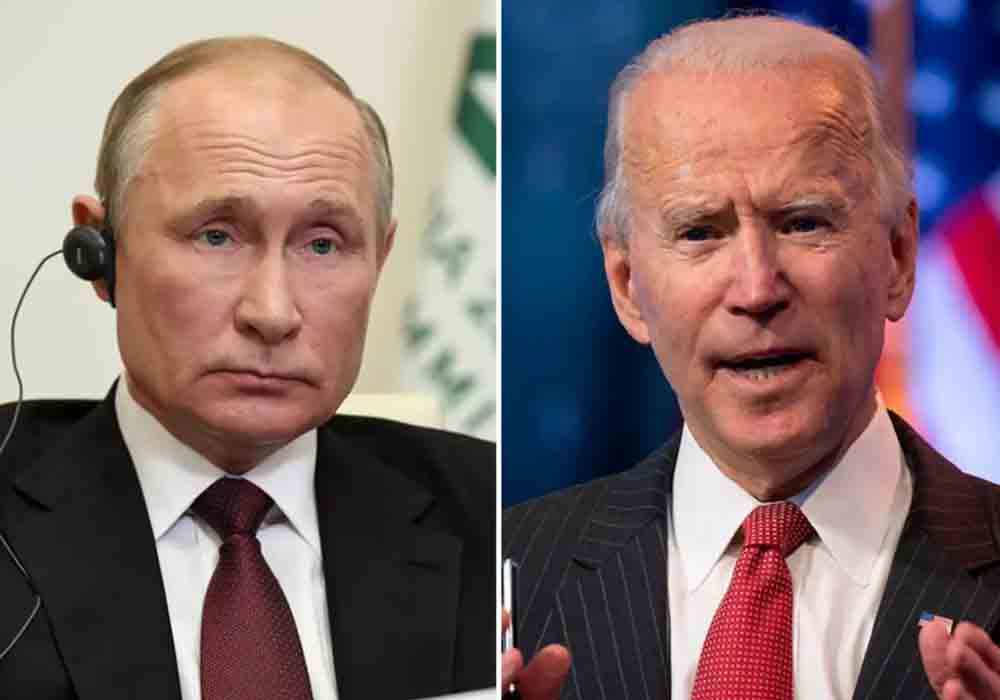 President Joe Biden on Wednesday called Russian President Vladimir Putin a war criminal as Russian attacks in Ukraine mount and the president there begged the U.S. Congress for more help.

“He’s a war criminal,” the president said of Putin as he left an unrelated event. It’s the sharpest condemnation yet of Putin and Russian actions by a U.S. official since the invasion of Ukraine.

While other world leaders have used the words, the White House had been hesitant to declare Putin’s actions those of a war criminal, saying it was a legal term that required research.

Biden spoke hours after Ukrainian President Volodymyr Zelensky delivered a video address to members of U.S. Congress in which he made an impassioned plea for the U.S. and West to provide more help to save his young democracy than world leaders have so far pledged to provide.

For the first time in a public address to world leaders, he showed a packed auditorium of lawmakers a graphic video of the destruction and devastation his country has suffered in the war, along with heartbreaking scenes of civilian casualties.

“We need you right now,” Zelensky said. “I call on you to do more.”

Lawmakers gave him a standing ovation, before and after his short remarks, which Zelensky began in Ukrainian through an interpreter but then switched to English in an appeal to help end the bloodshed.

Meanwhile, a theater where hundreds of people had taken shelter in Mariupol was bombed on Wednesday, according to local authorities, as hundreds of thousands of people remain trapped in the coastal Ukrainian city that has been encircled for weeks by Russian forces.

Mariupol City Council, who shared an image of the destroyed building, said Russian forces had “purposefully and cynically destroyed the Drama Theater in the heart of Mariupol.”

“The plane dropped a bomb on a building where hundreds of peaceful Mariupol residents were hiding,” it said.

Videos of the aftermath showed a fire raging in the theater’s ruins. The number of casualties is unknown, authorities said.

“It is still impossible to estimate the scale of this horrific and inhumane act, because the city continues to shell residential areas,” the council wrote on Telegram. “It is known that after the bombing, the central part of the Drama Theater was destroyed, and the entrance to the bomb shelter in the building was destroyed,” it added.

Petro Andruishchenko, an adviser to the mayor of Mariupol, described the theater as the largest shelter “in number and size” in the city’s center. “According to preliminary data, more than a thousand people were hiding there,” he said. “The probability of getting there to dismantle the rubble is low due to constant shelling and bombing of the city.”

The city has no electricity, water, food, with residents melting snow or dismantling heating systems for a drop to drink, he said on Tuesday.

Mariupol has been besieged by Russian forces since March 1. After weeks of failed attempts to establish safe civilian evacuation corridors, about 20,000 people managed to leave the city on Tuesday, Ukraine’s Deputy Prime Minister Irina Vereshchuk said.

“It is impossible to find words that could describe the level of cruelty and cynicism with which the Russian occupiers are destroying the civilian population of the Ukrainian city by the sea. Women, children, and the elderly remain in the enemy’s sights. These are completely unarmed peaceful people,” the city council said.

“We will never forgive and never forget,” it added.