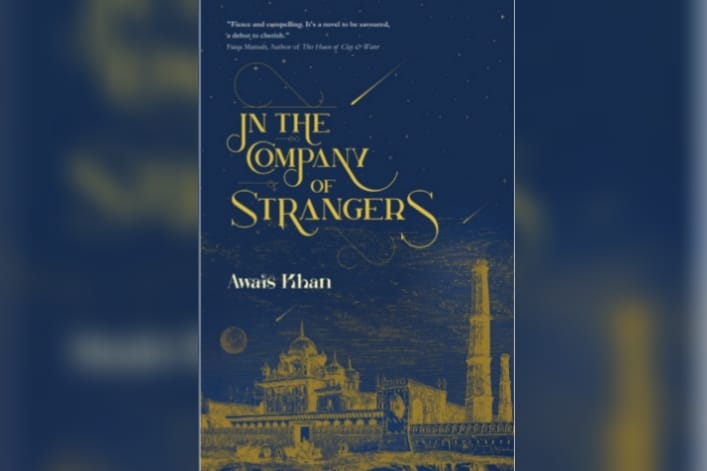 In the Company of Strangers is Awais Khanâ€™s debut novel published by Simon & Schuster. The book, despite being the authorâ€™s first publication, has created a ripple amongst readers globally.

The thematic concern of the novel is quite like Mohsin Hamidâ€™s Moth Smoke and Nadia Akbarâ€™s Goodbye Freddie Mercury, yet the finesse, beauty, and spontaneity with which Khan crafts the novel is unblemished and remarkable. With a hypnotizing effect created by the mere blurb of it, the book keeps the reader engaged and absorbed for the whole while until the narrative reaches the end. The climax and the conclusion overlap, making the reader want to read on until the suspense is broken.

The glamour and glitter of the elite world, parties with booze and drugs, nudity and pre-marital sex and terrorist attacks in the heart of Lahore on the pretext to rid Pakistan, the land of the pure of its apparent impurities and the clash between the liberal and conservative/orthodox mindsets, alarms the reader. There is no middle ground – just debauchery everywhere, whether it is physical, mental, or emotional.

Khan weaves the narrative beautifully, careful enough to keep each strand and each character connected to the other as well as holding onto the individual. The delicate thread that holds relationships together should not break, as seems to be the underlying message given by the author. Whether he can keep the fragments that bind relationships or not is a question I leave for the reader to ponder over.

The book opens several taboo topics. The major concern is that of womenâ€™s rights and the patriarchal setup of the Pakistani society, which has become decrepit and decadent. Mona, one of the lead characters puts up a fierce battle in front of her husband Bilal, who wants her to be a puppet whose strings are in his hands. Unlike most women who fall prey to male chauvinism, Mona is different. She breaks conventions and crosses societal boundaries without an ounce of fear or regret.

Ali, the other protagonist belongs to the media industry. He is a model who knows the modeling industry inside out as a quote in the book says, â€œThey had traded in their souls for this profession.â€

Mona and Ali, the two main protagonists become intimate with each other because both want to escape from the life they are living- a life without passion and purpose.

Khan shows how each character in his novel is going through an internal struggle. The reason behind why they act the way they do is hidden and is uncovered gradually as the novel reels through. Ali, Mona, Bilal, and Mir Rabiullah all have an agenda, and how will they reach their goal and what route they will take is what Khan will reveal through the novel.

The narrative runs like a marathon. One can at once feel the five senses of touch, sight, smell, sound, and taste. The choice of words is phenomenal and striking. The flow with which the narrative meanders is complicated yet intriguing, forcing the reader to continue reading.

Although Khan hasnâ€™t come up with a new theme, yet the way he has executed the plot is amazing. There is not a single meaningless dialogue or sentence. Every sentence, every word adds to the story and there is nothing that can be skipped.

The conclusion leaves the reader horrified, as it is unexpected since the reader is inclined to think otherwise from the start. Till the last sentence of the novel, the reader is unable to swallow the bitter reality!

Overall, In the Company of Strangers is to be cherished as a heavenly delight for all readers.