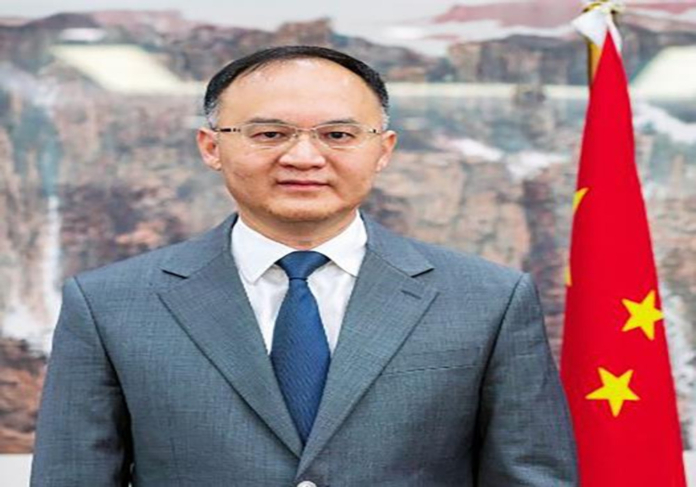 “A few days ago, the 20th National Congress of the Communist Party of China was successfully concluded, and so was Prime Minister Shehbaz’s maiden official visit to China,” the Chinese envoy said. For China and bilateral relations, these two major events were in a sequence, and the significance was self-evident and far-reaching, he said in an article, published in the local newspaper. He said the 20th CPC National Congress took place at a critical time as China embarked on a new journey to build into a modern socialist country in all respects and advance toward the Second Centenary Goal.

It has charted the course and established the guide to action for the cause of the Party and the country, he added. The ambassador said Communist Party’s General Secretary Xi Jinping was re-elected by a unanimous vote at the first plenary session of the 20th CPC Central Committee. “That will provide the most fundamental political guarantee for China to embark on a new journey towards a modern socialist country in all respects,” he added.

“Facing a highly uncertain world, in which our times and history are changing in ways like never before, China is responding to these uncertainties with its own certainty, hedging the instability of the international situation with the stability of its domestic and foreign policies, and providing a strong and lasting impetus for the recovery of the world economies with high-quality development and high-level opening up, making unremitting efforts for the peaceful development of the region and the world with a responsible attitude, he added.

As President Xi told PM Shehbaz, China will continue its fundamental policy of opening up and providing new opportunities to Pakistan and the rest of the world through continuous development. “PM Shehbaz was the first head of government to visit China after the 20th CPC National Congress, and China received the Pakistani prime minister with premium courtesy. President Xi Jinping, Premier Li Keqiang, and Chairman Li Zhanshu of the Standing Committee of the National People’s Congress held talks with him. Both sides issued a joint statement and signed or concluded a number of agreements/MoUs in the areas of e-commerce, digital economy, export of agricultural products, financial cooperation, protection of cultural property, infrastructure, flood relief, post-disaster reconstruction, Global Development Initiative, animal disease control, livelihood, cultural cooperation, space, geosciences as well as law enforcement and security.”

“President Xi met with PM Shehbaz twice in less than two months, and personally invited him to visit China immediately after the 20th National Congress. This well demonstrates the uniqueness of China-Pakistan relations and Pakistan’s important position in China’s overall diplomacy. This matchlessness lies at the highest levels of strategic coordination and political mutual trust – this is why the term ‘ironclad friendship’ is used to describe the relationship between the two countries. Pakistan sees its relations with China as a cornerstone of its foreign policy. China, as President Xi told PM Shehbaz, views its relations with Pakistan from a strategic and long-term perspective, and puts it as a priority in China’s neighborhood diplomacy.