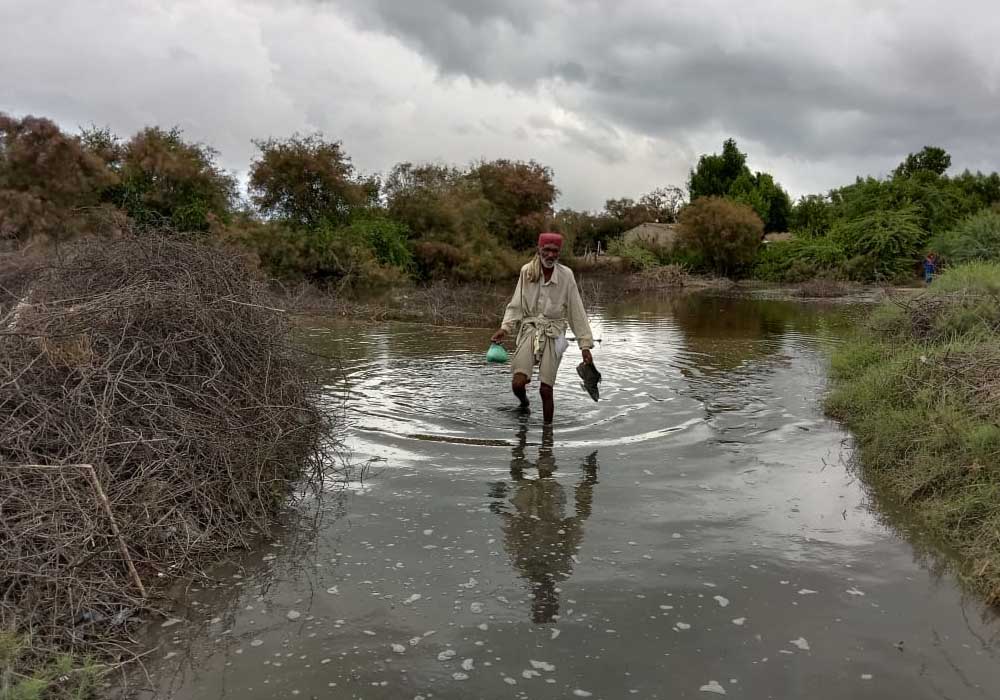 Sindh Chief Secretary Dr. Muhammad Sohail Rajput visited coastal areas of district Thatta that have been adversely affected by the recent heavy rainfall and sea erosion on Thursday and met with the misery ridden flood-affected masses.

Accompanying DC Thatta Ghazanfar Ali Qadiri and other revenue officials, he reviewed arrangements made by the district administration for strengthening protective dykes raised along the coastline of Thatta district. While talking to local media persons he said that the provincial government was well aware of the scale of devastation caused by heavy downpours and sea erosion in the coastal region of the province and was making efforts to bring things back to normalcy.

“We are committed to providing relief to those who had lost their homes and hearths during the rains and flood,” claimed the chief secretary.

He went on to add that the relief operation in the coastal region would be closely monitored. He said that maintenance of protective dykes was their priority during the prevailing state of affairs in order to avert further disaster. Talking about evacuation of flood affected families he said that they were in coordination with the National Disaster Management Authority for shifting of affected families to safer places and for provision of ration and other basic commodities to them.

DC Thatta said that coastal areas of the province were the worst affected areas by rain where relief activities were already underway, adding that they had sought assistance from armed forces for relief operations. On the other hand, PPP MNA Syed Ayaz Shah Shirazi took notice of the situation of Jati town of District Sujawal that was completely under rain water. Taluka administration informed concerned authorities about inundation of all four wards of Jati town and acute shortage of resources. PPP MNA in a proposal sent to Sindh government suggested launching ration distribution drive across the district.

However, a large number of people hailing from different walks of life staged demonstration in Jati demanding the Sindh government to declare coastal region of province calamity hit. Addressing protesters Syed Wafa Hussain Shah said that the agriculture sector was the mainstay of the district that had been abominably affected owing to heavy rains and sea intrusion after which people of this region would have to bear huge financial losses. “The Sindh government should provide assistance to growers for rebuilding the agricultural sector of the region,” he stated.