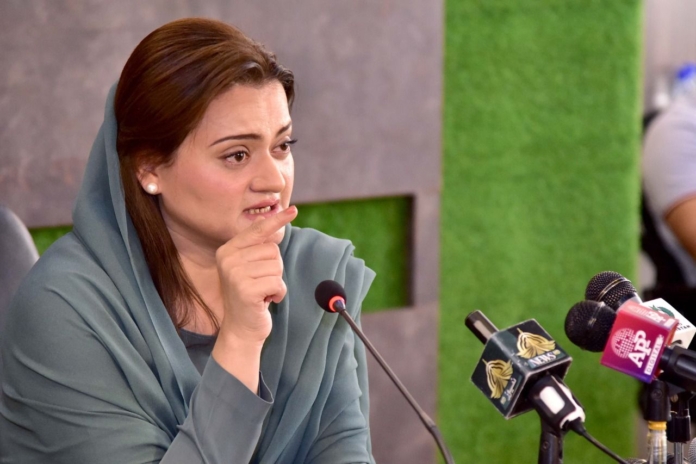 Federal Minister for Information and Broadcasting Marriyum Aurangzeb on Saturday criticized the previous Pakistan Tehreek-e-Insaf (PTI) government for “using the state-run Pakistan Television (PTV) for its own purposes”.

“Imran Khan was directly giving instructions to the PTV administration. Companies of his choice were giving equipment to the PTV on rent,” she alleged while addressing a press conference in Islamabad.

She said that the previous PTI government sold broadcast rights of cricket events to a private TV channel to promote their “anti-state narrative”.

She said that national television generated its revenue through two streams; firstly through the sports channel and the license fee that the people pay as a subscription fee in the bills.

The minister recalled that when the PTI government came to power in 2018, it claimed to transform the PTV and Pakistan Broadcasting Corporation (PBC) on the BBC model.

“However, these claims turned out to be hollow slogans.”

Marriyum said that when the incumbent government assumed power in April, it was revealed that the PTV Sports had signed an agreement with Group M and ARY for cricket broadcast rights.

“In April 2022, we set up a fact-finding committee to probe irregularities in the agreement.”

The minister said that broadcast rights of the PTV were compromised by signing the agreement on September 16, 2021.

Sharing details of the agreement, she said: “The PTV Sports management approached the PTV Board, claiming that it had no money to acquire broadcast rights.”

She added that this was the first time in the history of the PTV that it had no money to complete the task.

She said that an expression of interest was published in a newspaper on August 10, 2021, which included items related to public-private partnership and bids were sought under this scheme.

The advertisement also sought expression of interest for conversion of PTV Sports from SD to HD.

“Three days later an addendum was published with an amendment, saying cable and satellite broadcasters were needed, though this condition was not included in the pre-requisition notice for TEN Sports and ICC Rights when inviting bids.”

Marriyum said that terms of reference were later issued, which were different from the expression of interest.

The minister said that a review committee of the PTV signed the marks and issued a letter on August 28, which was signed by the director sports, director finance, director engineering, chief commercial officer and director admin and personnel.

“The letter categorically stated that Blitz Advertisers had earned the most points and offered a better partnership deal, but some points will have to be discussed with it before inking the agreement with the “company”.

She said that talks resumed on September 1, 2021 with the plan to make “the failed company a successful bidder”.

“On this occasion marks were changed, terms of reference were changed and remarking was done in complete violation of rules and procedure,” Marriyum said.

“In order to make the favorite firm successful, the PTV Board was informed that PPRA rules did not apply to the agreement, ‘which was not the case’.”

“The committee had asked for negotiations with the already selected company – Blitz Advertisers – but after remarking, the preferred company was selected.”

The minister vowed that there would be no compromise on the rights of the PTV and its broadcast rights would be returned to it at all costs.