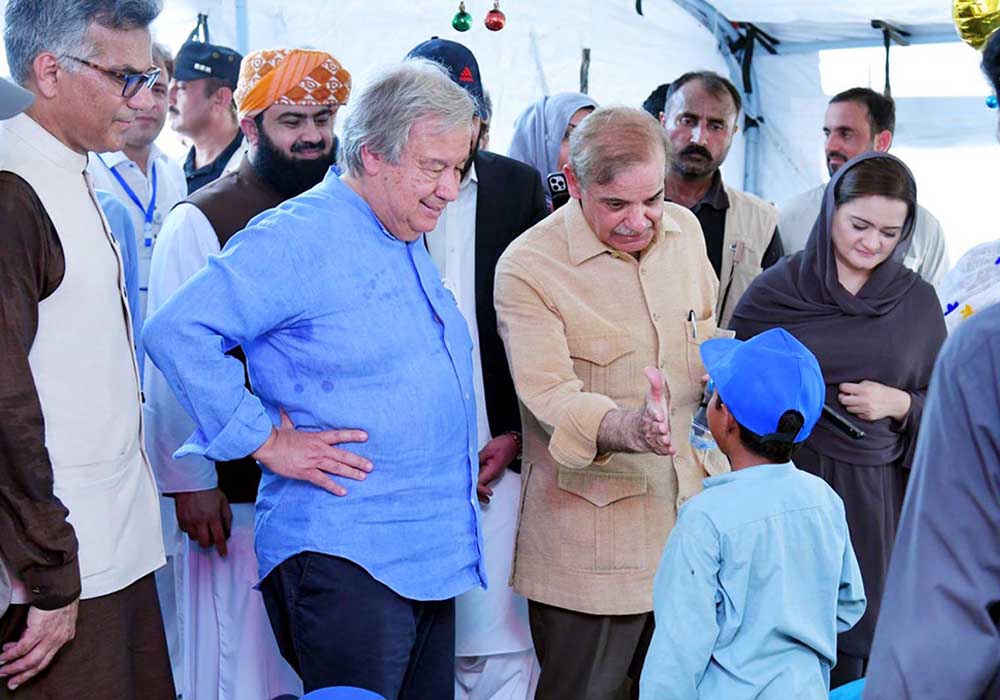 Talking to flood victims along with United Nations Secretary-General Antonio Guterres, the prime minister said that an amount of Rs70 billion allocated by the federal government was being disbursed among each flood-affected family under the Benazir Income Support Programme (BISP).

He told the people that the UN secretary-general had come all the way from New York to condole over the loss of about 1,300 lives as a result of flash floods.

He said that Sindh suffered from huge losses, where crops were damaged and livestock swept away. The UN secretary-general arrived here to express solidarity with the people of Pakistan, he added.

During a visit to flood-affected Usta Muhammad, the premier said it was very difficult to reach certain flood-hit areas of the province.

He said that floods had badly affected the road and rail infrastructure, besides damaging bridges.

Balochistan Chief Minister Abdul Quddus Bizenjo informed the UN secretary-general that they had utilised all the limited resources in the rescue, relief and rehabilitation efforts. He appealed to the global community to extend financial help to support the flood victims of the country.

Meanwhile, Minister for Foreign Affairs Bilawal Bhutto Zardari expressed gratitude to the prime minister and the UN secretary-general for their support and solidarity.

He said it was a historic event as the UN secretary-general had arrived in Larkana, adding that the federal, provincial and the international community would join hands to rebuild the affected areas with such structures that could resist future calamities.

The PPP chairman said that September was the busiest month for the UN chief, with the UN General Assembly session to be held later this month.

“The secretary-general took out time to personally visit Pakistan in our time of difficulty and witnessed first-hand the devastation that has been caused by the catastrophic monsoon rains that we faced for many months.”

Bilawal said UN chief spent the previous day in Islamabad, receiving briefings from the National Flood Response Centre. “And, today, along with Prime Minister Shehbaz Sharif, we accompanied the secretary-general to visit the flood-hit areas of Balochistan, where he met flood affected then he visited flood-affected areas in Sindh.

Bilawal said the people of Pakistan were paying a heavy price for climate change in the form of their lives and livelihoods. 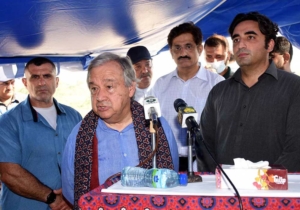 He said the people of Pakistan contributed less than 1 per cent to global carbon footprints. He said that response to this crisis must be a global response.

With the help of UN chief, we look forward to working with the global community to build better, to rehabilitate and to reconstruct the lives of our people, he added.