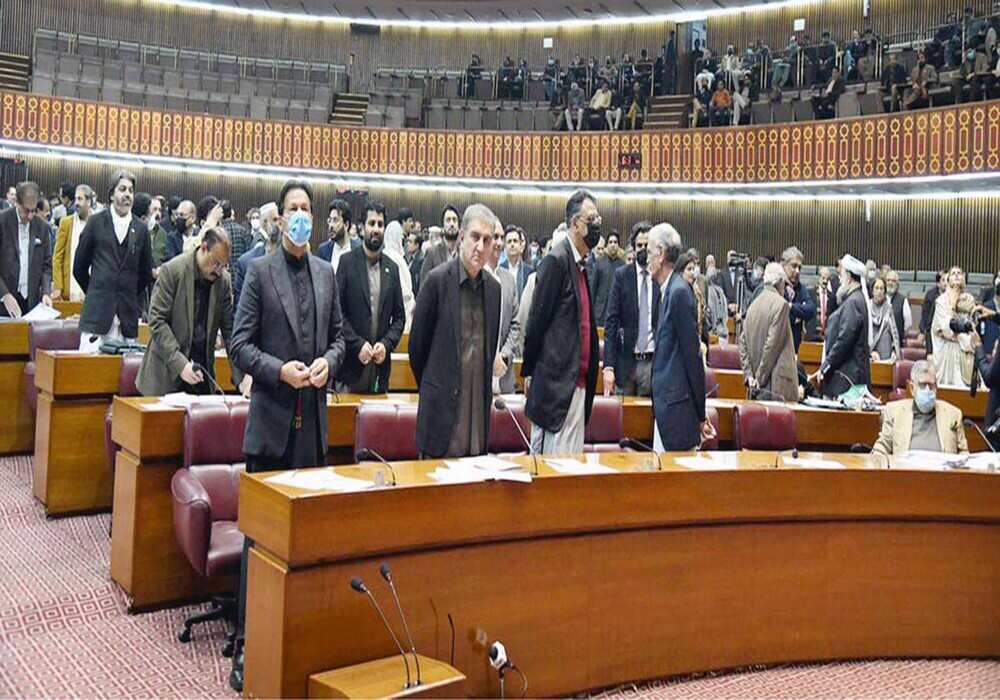 The National Assembly (NA) on Thursday passed the controversial Finance (Supplementary) Bill 2021 or the mini-budget as termed by the opposition and the State Bank of Pakistan (Amendment) Bill 2021 with a majority vote during an hours-long session amid fierce objection from the opposition benches.

The finance bill and the SBP bill are necessary to ensure that Pakistan’s sixth review of the $6 billion Extended Fund Facility gets cleared by the International Monetary Fund’s (IMF) executive board.

In the amended bill, the government rolled back its plan to impose additional sales tax on children’s formula milk, bread, and small cars. It also withdrew the proposal to impose taxes on laptops and computers.

The government’s amendments to clauses 5 and 6 were also approved during the session. Shortly after the session began, Pakistan People’s Party (PPP)’s Shazia Marri moved a motion recommending that the finance bill be circulated for public opinion under Rule 124 of Procedure and Conduct of Business in the National Assembly so that it could be proven how “anti-people” it was.

However, the motion was opposed by Finance Minister Shaukat Tarin.

Voting also took place on several amendments moved by the opposition to the finance bill that were subsequently rejected through a voice vote. The opposition demanded that a physical count be conducted for some of the amendments tabled by the opposition, including those by Mohsin Dawar and PML-N’s Shahid Khaqan Abbasi. However, the NA speaker refused under Rule 29 of Procedure and Conduct of Business in the National Assembly.

A physical count was later conducted on the amendments moved by PPP’s Marri, with 168 lawmakers against it and 150 in favour of it.

Later, a physical count was conducted for a second time. The government was once again in majority and the amendments were rejected. The opposition’s amendments to clause 3 of the finance bill were rejected with 163 votes against it and 143 in favour.

Earlier this week, the Senate approved the recommendations on the Finance (Supplementary) Bill 2021.

Presenting the final report related to the bill, Standing Committee on Finance Chairman Senator Muhammad Talha Mahmood had highlighted that the Opposition did not raise any objections to the bill.

Terming the “mini-budget” an “IMF budget”, Mahmood said that the supplementary finance bill will bring a tsunami of inflation in the country.

He added that this is not just an Rs343 billion budget it is far more than that, adding that the finance bill will have a “negative impact on the common man. On December 30, Shaukat Tarin presented the much-awaited supplementary finance bill – termed by the Opposition as a “mini-budget” – in the National Assembly.

According to the finance ministry’s proposal, the government will impose a tax on approximately 150 goods at a rate of 17 per cent. Therefore, goods that were currently either completely exempt from General Sales Tax (GST) or being taxed at 5 per cent to 12 per cent would now be taxed at 17 per cent.