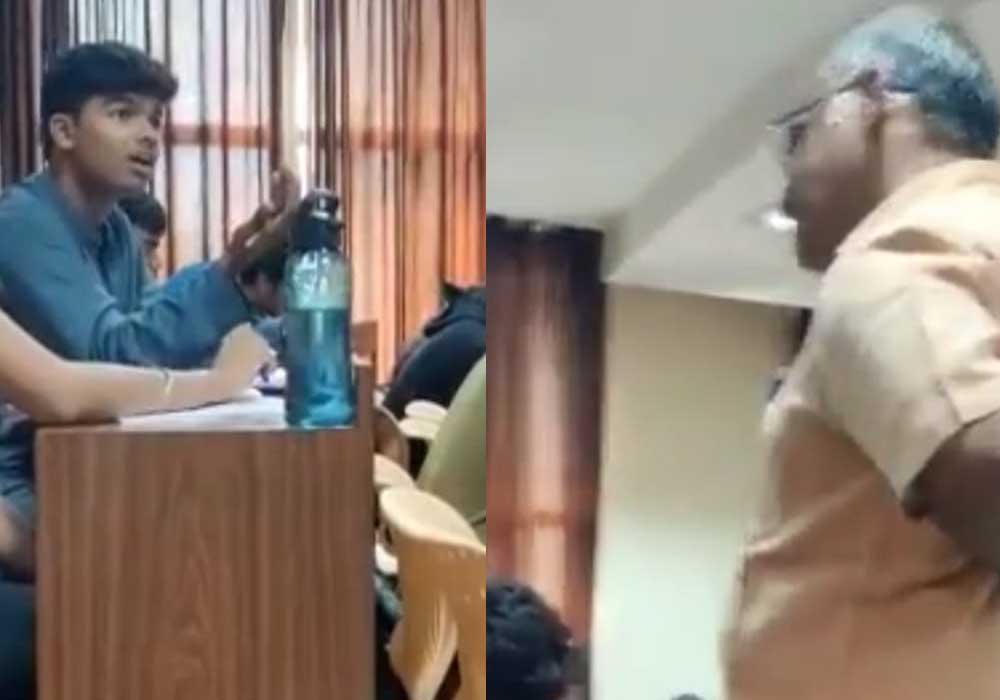 A Muslim student in Karnataka lashed out at the professor for calling him a terrorist during a class. In the video the Muslim student can be seen saying, “This is not a joke, being a Muslim in this country and facing this situation every day is not a joke.”

The teacher in the video tells the Muslim student that ‘you are like my son’, to which the young student says, ‘Will you talk to your son like this? Will you call your son a terrorist?” In response, the teacher says ‘no’, to which the student said, ‘How can you say this to me?’

“You are a professor, you are a teacher, you cannot call me like that,” the student said, to which the professor can be heard apologizing. The student can be heard saying, “Apologizing cannot change your thinking.”

The incident took place on Friday at the Manipal Institute of Technology in Udupi where the teacher has been suspended for declaring the student a terrorist. According to the report, the institute suspended the teacher and ordered an inquiry while the student is being counselled.

Social media has also reacted to the incident where many have criticized the behaviour of the teacher.

Ashok Swain, a professor at Upasala University, shared the video and wrote that in India a professor was calling a Muslim student a terrorist inside the classroom. He stated that it used to happen to minorities in India.

A Professor in a class room in India calling a Muslim student ‘terrorist’ – This is what it has been to be a minority in India! pic.twitter.com/EjE7uFbsSi

Journalist Swati Chaturvedi tweeted that this video was shameful and this was how it happened every day in Narendra Modi’s India.

Watch: "Can't Call Me A Terrorist" – Muslim Student Confronts Professor – NDTV https://t.co/fv2d0ObONf what has India become when a teacher has such entrenched bigotry against his own student. So shameful & yet so everyday in Modi’s India

Al Jazeera journalist Saif Khalid said it was not a joke to call the student a terrorist. He demanded that the teacher be fired from his job.

Calling a Muslim student ‘Terrorist’ is not funny. The bigoted teacher should be fired. #islamophobia https://t.co/uOtgczdAgE

Actor Arifi Lamba said that hatred and communalism have reached learning places, a student should not have to defend himself against bigotry.

Did a teacher call a Muslim student a terrorist? In the class? Is this some joke?

This has to be fact checked. Hatred& communalism has reached the temples of learning. A student should not have to defend himself against bigotry.@ShyamMeeraSingh @PJkanojia https://t.co/auWkrUyZKL