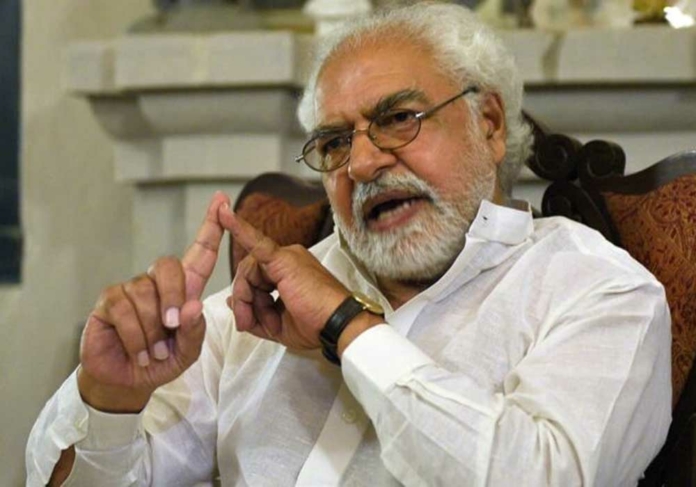 Senior journalist Ayaz Amir was released from the murder case against his daughter-in-law Sarah Inam by a local court in Islamabad on Tuesday.

Ayaz Amir’s son Shahnawaz is accused of killing his wife Sarah at home on September 23 following an argument over a family matter.

He was arrested by police from a farmhouse in Islamabad after they identified him as a suspect in his wife’s murder.

He eventually admitted to killing his wife and claimed he did it because he thought his spouse was having an affair.

On Saturday, a trial judge authorized the arrest warrants for Ayaz Amir and his ex-wife Sameena Shah since Sarah’s family had named the two as suspects.

Amir was taken into custody while his ex-wife later received pre-arrest bail.

After the completion of his one-day physical remand earlier in the day, Ayaz Amir was brought before the court.

A five-day extension in Ayaz’s physical detention for additional questioning was requested by the police at the beginning of the hearing.

According to the police’s statement to the court on the investigation’s status, Ayaz Amir made contact with the main suspect Shahnawaz.

Police also informed the court that Sarah’s parents had arrived in Pakistan.

Ayaz Amir’s attorney continued to argue that his client shouldn’t be included in the case because he had no connection to it.

At the request of Sarah’s uncles, Colonel (retd) Ikram and Zia-ur-Rahim, who have accused Ayaz Amir and his ex-wife of being responsible for their niece’s murder, a new clause of Section 109 of the Pakistan Penal Code, which deals with punishment for abetment, was added to the police report that was filed after the murder.