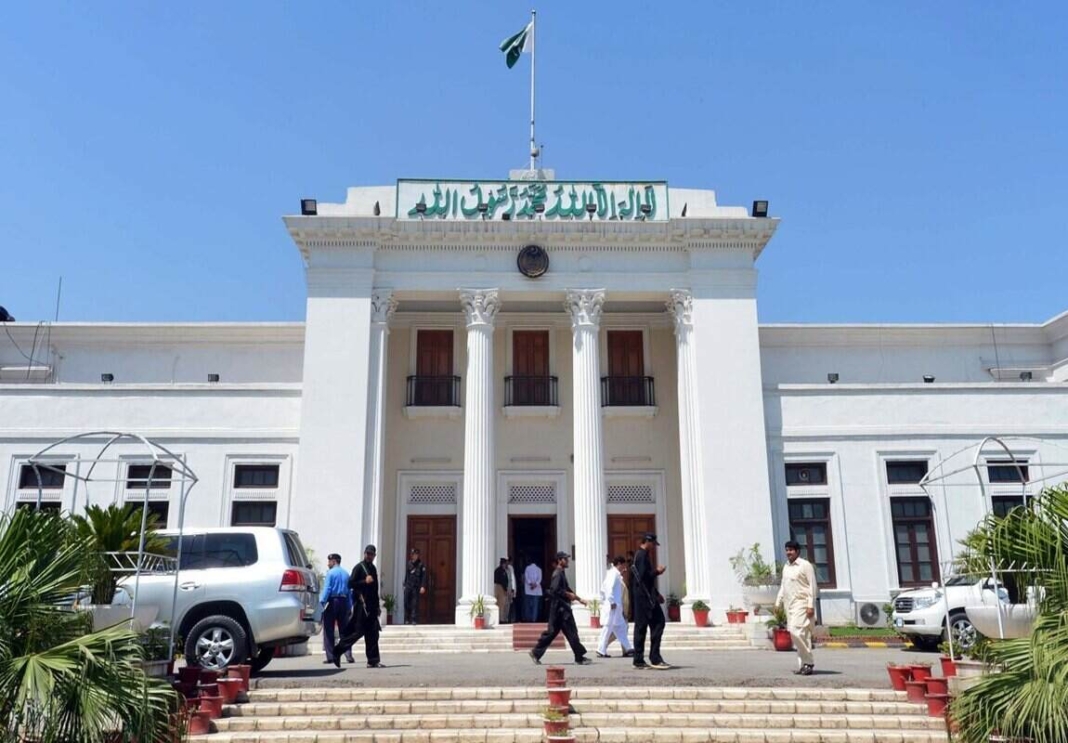 The opposition and treasury members in Khyber Pakhtunkhwa Assembly on Monday jointly protested against the threats received by ANP parliamentary leader Sardar Hussain Babak and other legislators from extortionists and the deteriorating law and order situation in the province.

After recitation of the Holy Quran, member of the Pakistan People’s Party, Nighat Yasmeen Orkazai said on the point of order, “I salute the martyrdom of the policemen due to terrorist activities in different areas of the province, and I offer my condolences to the families.”

She questioned that despite all the arrangements and blockades, where do these militants come from.

Khushdil Khan of ANP said that the police was being attacked every day, similarly, MPA Sardar Hussain Babak and other members were getting threats while on the other hand.

Pakhtun Yar Khan of PTI said that last month, three persons from his constituency were abducted in North Waziristan and their bodies were found in Mir Ali Bazar the next day.

On lodging protest over the incident, the administration took action and arrested the people, which he called “injustice”. Sardar Babak said that the house of ANP’s MPA Faisal Zeb in Shangla was attacked twice and he is being threatened for extortion. He said, “I was attacked three times, Lakki Marwat Police was attacked and martyred six personnel, police were attacked in Shabqadar and Katlang and recently three police cops were killed in Akora Khattak area of Nowshera.”

He said that the major problem in the province is unrest. There is no investment here as the investors had left the province due to the threats of terrorists.

He wondered what the government’s policy was on the ongoing wave of terrorism. To what extent state is fulfilling its responsibility in this regard, he further asked.

Parliamentary leader of PMLN Sardar Muhammad Yousaf said that when the MPAs started receiving threats, how can the common man be safe?

PTI has been in power for ten years but the law and order is deteriorating day by day. Steps should be taken to prevent such incidents by forming a special committee.

During discussion, Transport Minister Shah Muhammad suggested that a parliamentary committee should be formed against the murders and looting.

Responding to the concerns of parliamentarians, Adviser to Chief Minister on Home and Tribal Affairs Babar Salim Swati said that the department is trying day and night to maintain peace.

He said that during the last 10 months, around 540 terrorists were arrested, 141 terrorists and criminals were killed in police encounter including 42 hardened criminals carrying head money.

He said 88 police officers and 109 personnel were injured. There was not a single drone attack in PTI’s federal government, he said. He directed the home secretary to inquire into the arrest of the protesters in Bannu.

Meanwhile, Sajida Hanif of PTI on her point of order condemned JUIF Chief Maulana Fazlur Rehman remarks about PTI’s women, and then the party legislators staged walked out against the use of offensive words for women by the chief of Jamiat Ulema-e-Islam Maulana Fazlur Rahman in Hazara.

Meanwhile, the Khyber Pakhtunkhwa Ministers (Salaries, Allowances and Privileges) (Second Amendment) Bill, 2022 to allow use of aircraft or helicopter of Government, at the Government’s expenses was tabled in the House on Monday. Minister for Labour Shaukat Yousafzai moved the bill in the House chaired by Speaker Mushtaq Ahmad Ghani.

The second amendment bill proposed that the chief minister could hire an aircraft or helicopter from the open market or from Pakistan Army, Pakistan Air Force or federal government for official use, at government expenses, in accordance with the rules or regulations.

It further said that the chief minister could allow a minister, advisor or special assistant to chief minister, public servant, or government servant to use an aircraft or helicopter of government, at the government expense, for official use or for any journey relating to his duties as such.

“Any aircraft or helicopter of government, subject to availability and with the prior approval of the chief minister, be used for private purposes on payment of charges, at the rate determined by government from time to time,” it further added.

“While using any aircraft or helicopter, the chief minister, a minister, advisor or special assistant to chief minister, a public servant or government servant, so authorised under sub-section (3), may be accompanied by and fly together with his support staff, aides and all other individuals that he deems necessary for such air journey or excursion”.

The bill validated all the official journeys and excursions, carried out and undertaken on any aircraft or helicopter of government, by the chief minister, any minister, advisor or special assistant to chief minister, public servant or government servant, or any of his support staff, aides, any other individual, on and from November 1, 2008 till the commencement of the KP Ministers (Salaries, Allowances and Privileges) (Second Amendment) Act, 2022 and could not be questioned for want of any deficiency of procedure or approval, as the case might be.

The KP Right to Public Service (Amendment) Bill, 2022 and the KP Regularization of Services of Project Employees of the Directorate General Livestock and Dairy Development (Extension) of Erstwhile Federally Administered Tribal Areas Bill, 2022 were also tabled in the house moved by Minister for Labour Shaukat Yousafzai. Later, the speaker adjourned the assembly proceedings until today (Tuesday) 2pm.