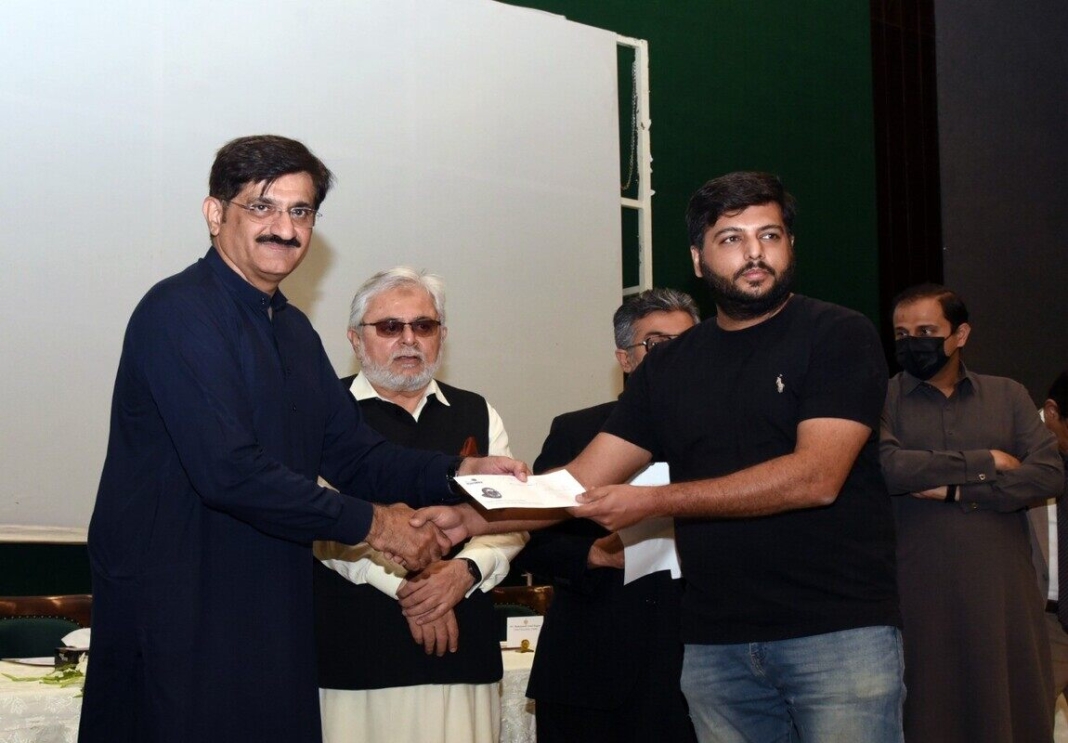 Sindh Chief Minister (CM) Syed Murad Ali Shah, distributed compensation cheques worth Rs445.197 million among 358 the fire-affected shopkeepers of Cooperative and Victoria markets, Saddar so that they could restart their business activities, particularly during the peak season of Eid ul Fitr.

The ceremony was organised at the CM House on Friday and was attended by provincial ministers, chief secretary, KCCI office-bearers, Mohammad Idress, Zubair Motiwala, AQ Khalid, and affected shopkeepers of the fire incident of November 2021.

It may be recalled that on November 14, 2021, an unfortunate incident of fire occurred in Cooperative Market, Saddar, in which many shops were completely or partially damaged/burnt. The chief minister had constituted a committee `Karachi Affected Relief Committee’ under Minister Cooperatives Jam Ikram Dharejo. The committee assessed the claims of Victoria Shopping Center where 20 shops were affected and Saddar Cooperative Market where 338 shops were burnt and recommended compensation of Rs52.450 million and Rs392.747 million for both the markets, respectively.

The chief minister approved the amount and handed over the compensation cheques to the fire affected shopkeepers so that they could restart their businesses.

Speaking on the occasion, the chief minister said that he was really shocked and felt deeply saddened after hearing the news about the unfortunate inferno incidents where all the shops were completely burnt to ashes causing massive destruction and immense financial losses to the shopkeepers.

Shah said that the Businessmen Group’s Chairman Zubair Motiwala and the Karachi Chamber of Commerce and Industry (KCCI) timely approached him and shared all the details of the destruction and sought compensation for the affectees of this incident.

“After duly examining the extent of the damages, the Sindh Government and the leadership of Pakistan People’s Party were keen to help out the distressed shopkeepers by extending full financial support to all the affectees of the Cooperative Market and Victoria Building,” he said.

Murad Ali Shah said that it was not the first time that the Sindh government has supported the business community in difficult times. “Previously, even at the time of Bolton Market fire incident in 2009, our government provided due compensation to all the affectees,” he said and added, “this time again, we decided to fully compensate the affectees.”

The CM hoped that such fire incidents would be prevented by putting in place proper fire safety equipment. He urged the business community to install the requisite fire safety equipment at their markets and take care of civil laws to avoid any such unfortunate incident from occurring again.

Cooperative Minister Jam Ikram Dharejo and others also spoke on the occasion. The shopkeepers thanked the chief minister and PPP leadership for giving them 100 percent compensation.