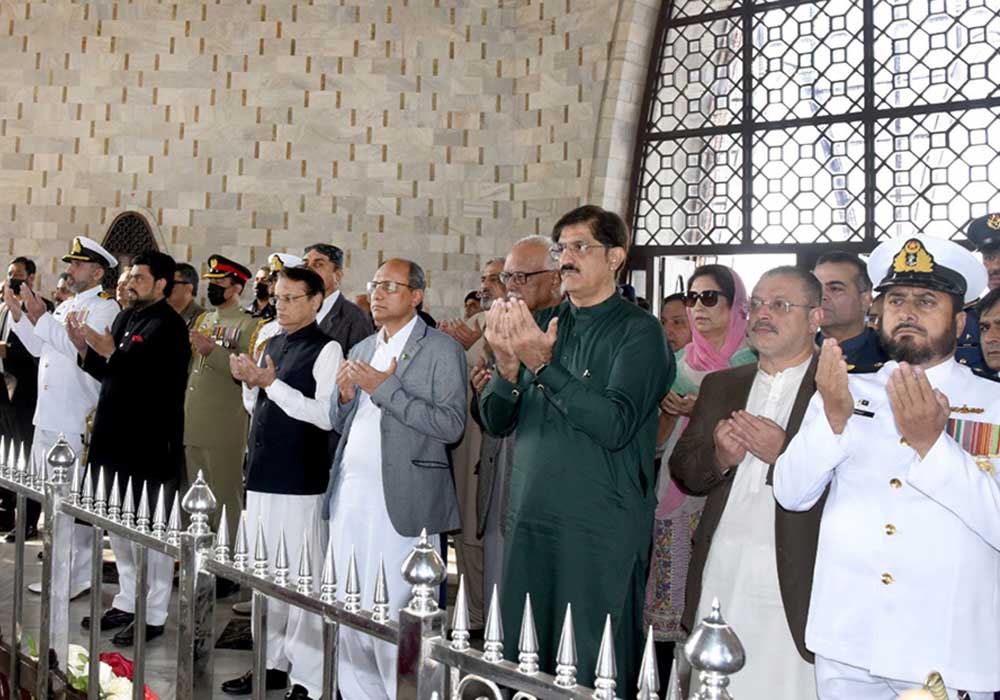 Sindh Chief Minister Syed Murad Ali Shah has said that on the Quaid-i-Azam Mohammad Ali Jinnah’s 146th birth anniversary, they should reaffirm their commitment to steering the country out of different crises by forging unity and discipline so that the country he had founded could flourish.

This he said while talking to the media at Mazar-i-Quaid that he visited along with his cabinet members to pay tribute to the father of the nation on the occasion of his 146th birth anniversary.

Murad said that the nation needed unity to face all the challenges, including the financial and reemerging wave of terrorism, so this beloved country that Quaid-i-Azam Mohammad Ali Jinnah had founded with his untiring efforts, visions, and sagacity could attain new vistas of development and prosperity.

He said that a new wave of terrorism had started emerging. “The incident of Banu and Islamabad are condemnable, and this nation brought into being by Quaid-i-Azam would nip in the bud all the nefarious designs of the enemies of this country,” he said.

Murad said that “on this day, we must remember the sacrifices and struggles of the people of Kashmir for their just cause.” He added that the people of Pakistan were with the oppressed people of Kashmir. The CM also recalled the problems of the people affected by the devastating floods. “The winter has multiplied their problems and we all must help them at this time of need,” he said, adding that his government was trying its best to rehabilitate the flood-affected people.

Earlier, the chief minister was received by his cabinet members, chief secretary, IG police, commissioner of Karachi, and others when he arrived at the Mazar. The CM received Governor Kamran Tissori when he also arrived to pay respect to the father of the nation.

Murad along with his cabinet members laid a floral wreath and offered fateha to pay respect and gratitude to the great leader. The CM met with the family members of the father of the nation present at the Mazar.

Talking to the media just after inaugurating the headquarters of Sindh Emergency Service, the chief minister said that he had held a high-level meeting a day before and had given clear instructions to the law enforcement agencies to launch a vigorous operation against street criminals. He said that during the last two weeks some incidents have happened in which citizens have lost their lives while resisting muggers.

“The police have made some arrests and the killers would be brought to book at any cost,” he said.