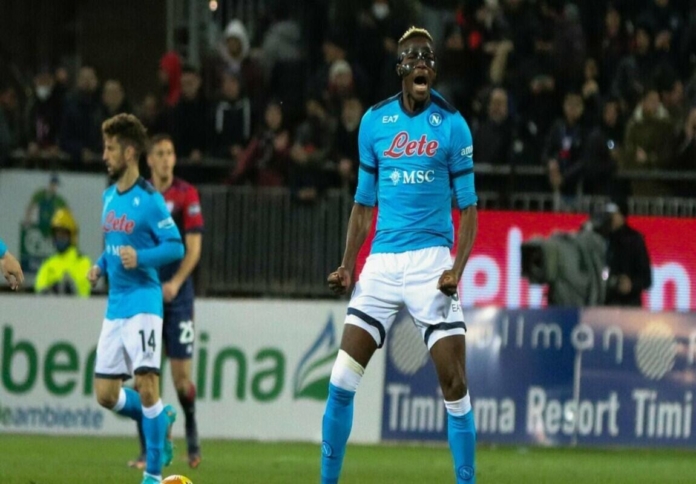 Napoli missed out on the chance to move top of Serie A on Monday after Victor Osimhen snatched a barely deserved 1-1 draw at rejuvenated Cagliari.

Nigeria forward Osimhen saved a point for Napoli when he crashed in a powerful header with three minutes remaining but it was not enough for the away side to take first place from AC Milan. Luciano Spalletti’s outfit would have taken a top spot ahead of Milan on goal difference had they won in Sardinia but instead are two points back in third.

They were outplayed by a Cagliari team who took the lead through Gaston Pereiro in the 58th minute and were disappointed with the draw after having more than enough chances to seal the win before Osimhen struck.

“It was a difficult match for us. Maybe we didn’t deserve what we got here, or rather Cagliari deserved more,” Spalletti told DAZN.

“We never had the game under control, so it’s probably a good result for us. We didn’t do enough.”

Cagliari would have moved out of the relegation zone with a win but stay 18th, level on 22 points with Venezia who are one place outside the bottom three due to Osimhen’s late leveller. Walter Mazzarri’s side looked doomed to Serie B after losing at Juventus just before the winter break but have won three of their seven league matches since the turn of the year – losing just once.

“We played really well, it’s a shame that we didn’t get the win but we need to continue playing like this, with the same spirit,” Pereiro told DAZN. “Then the three points which we deserved today will come the next time.”

It was another reprieve for Milan following their 2-2 draw at bottom side Salernitana on Saturday, as second-placed Inter, who are level on 54 points with Napoli, were beaten 2-0 by Sassuolo on Sunday.

Napoli were missing a host of players to injury including captain Lorenzo Insigne and key midfielders Stanislav Lobotka and Andre-Frank Zambo Anguissa, and the performance at a windy Unipol Domus stadium will have caused concern ahead of Thursday’s Europa League showdown with Barcelona.

Pereiro was handed what looked like being the winning goal by David Ospina shortly before the hour mark, when the Napoli goalkeeper let a week shot squirm through his fingers and into his net.

However Ospina then redeemed himself with some important saves which kept the deficit to one goal and allowed substitute Osimhen to earn Napoli a draw when he thumped home Mario Rui’s deep cross. Joao Pedro and Alessandro Deiola had already missed great chances before Ospina flapped at Pereiro’s shot and the home fans could barely believe their eyes two minutes later when Napoli’s stopper pulled off a great save to keep out Deiola’s close-range header before Daniele Baselli somehow fired over.