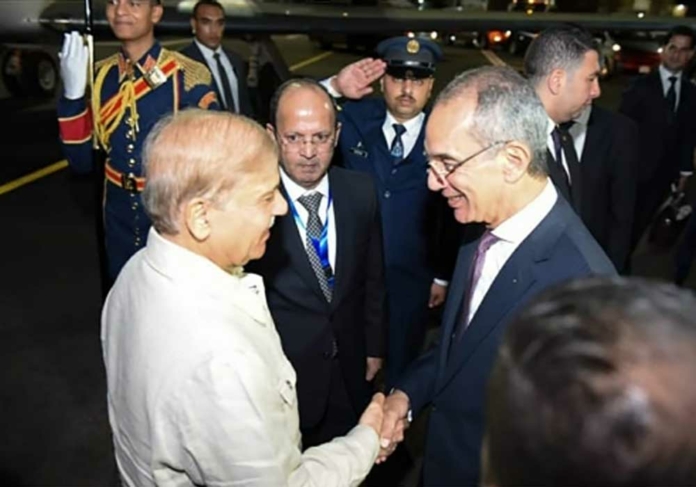 Prime Minister Shehbaz Sharif arrived in Egypt on Sunday to participate in the Sharm El Sheikh Climate Implementation Summit (SCIS). PM Shehbaz was received at the international airport of Sharm El Sheikh by Egypt’s senior officials and the officers of the Pakistani embassy. Before departing, PM Shehbaz warned that turning a blind eye to climate change’s lethal effects would be “criminal”. He also asked for “climate justice”, urging the world to financially support “developing countries” so that they could reduce the “multifarious threats of climate change”. The premier added that according to the country’s Post-Disaster Needs Assessment, Pakistan’s recovery from flood devastation can be held back by “public debt, rising international energy and food prices, and lack of access to adaption funds”. This two-day summit, which begins today (Monday), is a part of the 27th United Nations Climate Change Conference (COP27). The premier will also participate in high-level events as a speaker; including the UN secretary general’s roundtable to launch the “Early Warning Systems for Executive Action Plan” and the “Middle East Green Initiative Summit” on Nov 7, being hosted by Saudi Arabia Crown Prince and Prime Minister Mohammad bin Salman. PM Shehbaz is also scheduled to hold bilateral meetings with several world leaders on the margins of the summit.