Poetry Society of Texas honours Dr. Amanullah Khan with award on completion of its 100 successful years The Poetry Society of Texas celebrated its centennial on the fifth of this month, presenting awards to 10 of its prestigious members as a token of appreciation for their services to the society and the field of poetry itself.

Dr. Amanullah Khan, originally a Pakistani based in Texas, made his fellow countrymen proud by bagging one of those awards. Dr. Amanullah Khan, whose English language poetry is infused with a liking and nostalgia for Pakistan’s rural culture, has also remained a former president of the Poetry Society of Texas, the oldest running poetry club in the United States of America – founded in 1921. 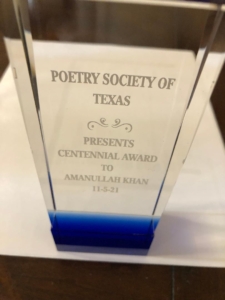 Dr. Amanullah Khan, whose birthplace is Kasur, inherently holds an inclination towards Punjabi poetry, but in order to cater to a wider circle of readers, especially those belonging to his current hometown Texas, Khan has published three books of English poetry, one of them being Of Neem, Nidus and Olive: A Life which is rich with nature as it exists in Pakistan’s rural areas. Not only this, but Dr. Amanullah Khan is also a KEMU graduate. Having attained his education from Lahore, he now resides in Texas where his services as a cancer specialist are highly appreciated and honoured. 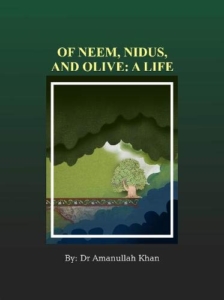