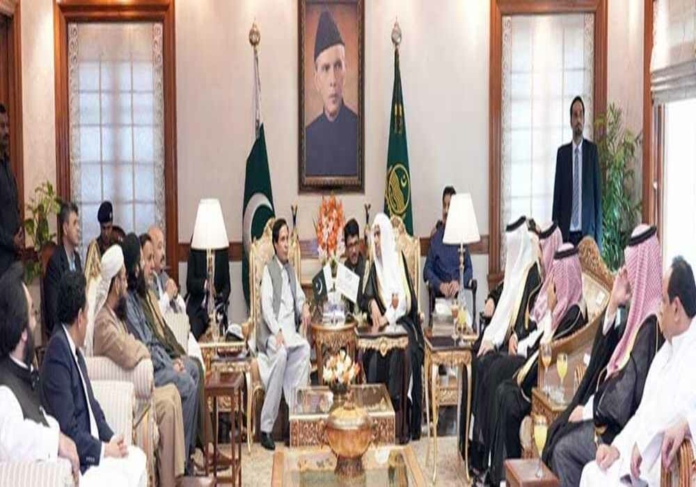 Ambassador of Saudi Arabia Nawaf Bin Saeed Ahmed Al-Maliki, Abdul Rahman Khalil Al-Khadidi, Abdul Wahab Muhammad Abdul Aziz Al-Shahri, Khalid Mufarah Al-Watiyabi, Muhammad Saeed Al-Ghamdi, Saeed Al-Harthi and others were part of the delegation. Speaking the occasion, the chief minister said the relations between Pakistan and Saudi Arabia are exemplary as every Pakistani considers the kingdom his second home. Saudi Arabia has stood by Pakistan in every hour of trial, he noted and added that during the recent floods, assistance was provided by the Saudi government to the flood victims.

The chief minister said that the Quran Board and Sira’t Academy have been established by the government along with the inclusion of a clause related to the Finality of Prophethood (PBUH) in the marriage certificate. The CM said that ulema of all schools of thought have been given representation in the Ulema Board. With the consultation of ulema and religious scholars, the publication and sale of books and materials, based on religious hatred have been banned in the province and all controversial literature has been confiscated, he added. The government has also made legislation in this regard, he added.

Nazra Quran and its translation has been made mandatory for the students in schools whereas frames of Quranic verses have been displayed in all government offices of Punjab. In the building of the Punjab assembly, the verses about the Finality of Prophethood (PBUH) are shining beautifully. Rabita-e-Alam-e-Islami is making great efforts to promote interfaith harmony, he noted. Sheikh Muhammad Bin Abdul Karim Al-Essa and others thanked CM Parvez Elahi for the welcome and hospitality in Punjab.

Sheikh Muhammad bin Abdul Karim Al-Essa met lauded CM Elahi’s invaluable services for religion and stated that the legislation which has been done by him for the religion is highly praiseworthy. He further stated that he acknowledges his religious services with the core of his heart and that he has performed highly appreciable work for the religion of Islam. While talking with the CM, Al-Essa further said that he has taken a historic step by doing legislation for Khatam-e-Nabuwat (PBUH) oath. Undoubtedly the noble steps being taken by the CM under his leadership relating to the religion are appreciable and the noble deed which he is doing in this regard has been bestowed upon you by Allah Almighty.

He remarked that he highly acknowledges the keen interest being taken by the CM for the religious services and prayed for his further successes. Sheikh Muhammad bin Abdul Karim Al-Essa and the delegation members thanked the CM for giving them a warm reception and for their gracious hospitality.