Pakistan and India showed well in their T-20 combat. It was quite an interesting competition. At the last ball, India needed two runs to win. It became a thrilling moment. The last ball from the Pakistani baller became no ball.

India earned one run for it and gained a chance for one more ball. They made it and won the very heated match watched and enjoyed by millions of cricket lovers. Players from both sides performed at their best and viewers were not disappointed. It is not for this occasion that I take this match as a game only its result might give someone a high sense of victory and the other team can accept it as a challenge for the future, but the game’s victory and defeat are not victory or defeat of the life’s targets or the victory and defeat of the armies and countries. If we look at the games’ objectives, the main concept behind them is the exercise through which we keep ourselves healthy and active. For making our exercises interesting and lively we do them in team form. We set some principles and rules for securing points and suppose that team getting more points will win. What is won in games is exercise, discipline, tolerance, cooperation, and sportsmen spirit, which means accepting our failure with a smiling face. If we don’t learn these things and games don’t change us from impatient to the patient, then presumed victory has no meaning at all. It is just to keep the interest high that we agree to accept the team securing more points as the winner, otherwise no one earns anything besides the set objectives of the games. This is an era of conflicts and cold wars. Nations especially big countries are not ready to give equal status to the weaker nations. Fifth-generation war is a technique to create hatred between nations and create an environment apt for the destruction of the nations and countries. In such a dangerous and pitiable global environment different levels of world sports competitions and the Olympics are having a wonderful impact on creating a friendly environment at the world level. Sports competitions and their coverage by media also help promote healthy activities in the youth. Sports promote higher-level ethical norms and their zeal and excitement give us relief from tedious social and economic problems. They are the wonderful recreation provided free to the people. As far as our country is concerned sports have played a wonderful part in creating national unity and harmony. When teams of different nations come in front of each other it is natural to show all of our sympathies and likings for our teams and the way our people pray for our teams and athletes to send them on the victory stand is the best manifestation of our love for our nation and the country. The best thing to think about in this regard is to make the games compulsory for our youth. In schools, colleges, and universities every student must play at least one game. In offices where people are not involved in any physical practice, the employees must be provided game opportunities. This could bring the nation out of all the worries, frustrations, and mutual conflicts. Freshness will prevail in our intellectual environment and fresh minds will create opportunities all around for the happiness and prosperity of the nation.

Imran Khan and his tigers should not show their power through the long march and sit-ups. They need to show sportsmen spirit which is expressed through national dialogue, decent behaviour, not responding to the opponents’ misbehaviour, and boosting. The majority groups of a country always have major responsibilities on their shoulders. They cannot behave like spoiled children who are always ready to break all the precious things in their homes when they are furious. People are expecting hopeful positive results of some backdoor negotiations going on somewhere at some level for the last many days but of no gain. Everyone knows whom people expect something good from and if it goes worst at the politician’s level who will be blamed for all of that? It goes without saying that our good institutions should put the bad institution of politics on the right path and this healthy environment for national dialogue must be created by the efforts of all stakeholders. Again and again and again one can say by putting a hand on his chest that at this critical moment we need help from good institutions to eliminate the bad from politics and let the real democratic majority rule be exercised in the country. 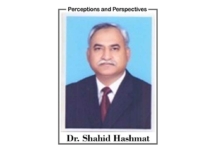