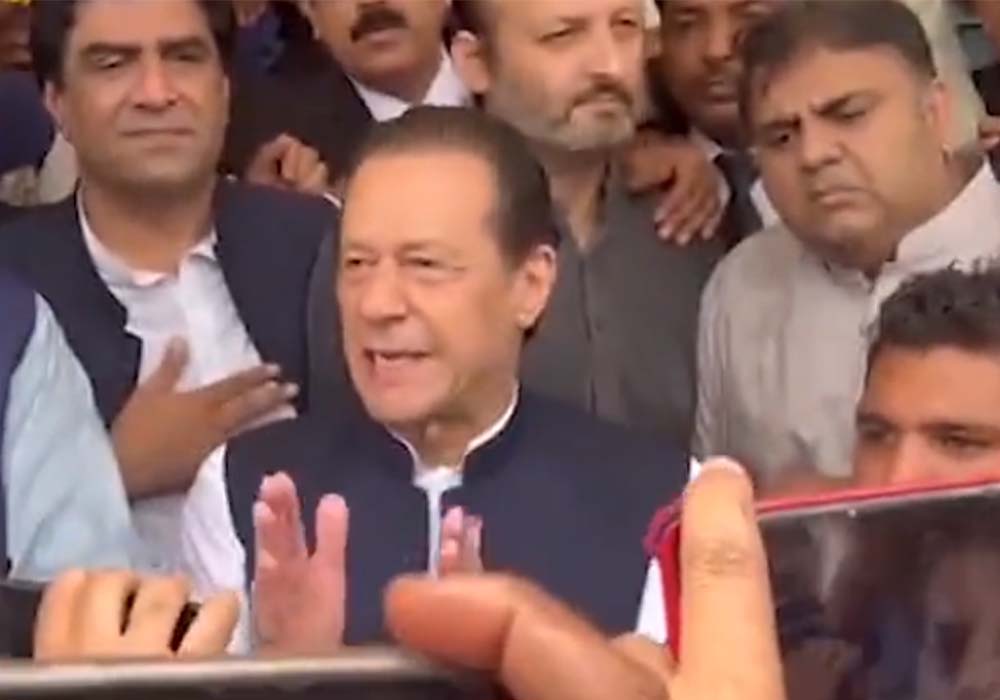 Pakistan Tehreek-e-Insaf (PTI) Chairman Imran Khan has been granted bail from Anti-terrorism Court (ATC) till September 1 against the surety bonds of Rs100,000.

A terrorism case was registered against Imran Khan in Margalla police station for allegedly using threatening remarks against Additional Session Judge Zeba Chaudhry in his speech in Islamabad on August 20.

Judge Raja Jawad heard the case. Imran Khan’s lawyer Babar Awan said that according to the FIR three people including IG Islamabad, DIG Islamabad and a woman judge were threatened, but all three of them were not complainants in the case, but on the other hand, a magistrate was the complainant.

Awan stated that Imran Khan had only said to take legal action against the mentioned people.

Earlier, upon his arrival at the ATC premises, Imran Khan walked into the building of the judicial complex as his vehicle was not allowed to enter the building.

The PTI chairman had filed an application for pre-arrest bail in an anti-terrorism case. The plea was maintained on the grounds that the case was filed against him with ill intentions.

A large number of PTI leaders and workers were also present outside the court premises to show solidarity with Imran Khan.

Tight security measures were taken ahead of the arrival of Imran Khan at ATC. According to media reports, the roads leading to the judicial complex were blocked while as many as 400 policemen and personnel of Frontier Corps (FC) were deployed at the complex. The police also barred the media from entering the premises of the court earlier.

After the hearing, while speaking to the media outside of the complex, Khan said that efforts of “technical knock-out” are being made due to fear of the increasing power of PTI.

He also said that PTI has become the largest political party in Pakistan and all of the other parties were afraid of the increasing power and popularity of PTI.

Imran Khan decided to appear before the anti-terrorism court for an extension in his bail plea after he was charged under ATA for speaking against a judge and Islamabad police officials. Previously, the Islamabad High Court (IHC) had granted pre-arrest bail to former Prime Minister Imran Khan till August 25 in a terrorism case.

On the other hand, Khan has been granted bail in another case against violation of section 144. Additional sessions judge Tahir Abbas granted bail against a deposit of surety bonds worth Rs5,000.

Imran Khan and several PTI leaders had been booked for violation of section 144 in Islamabad. The FIR had been registered at the Aabpara police station in Islamabad.

The FIR had stated that Imran Khan and other PTI leaders had violated Section 144. It also said that at the behest of Imran Khan, roads were blocked by PTI leaders and their supporters.

PTI leader Asad Umar was also granted interim bail in the case regarding violation of Section 144 during the rally on August 20 in Islamabad.