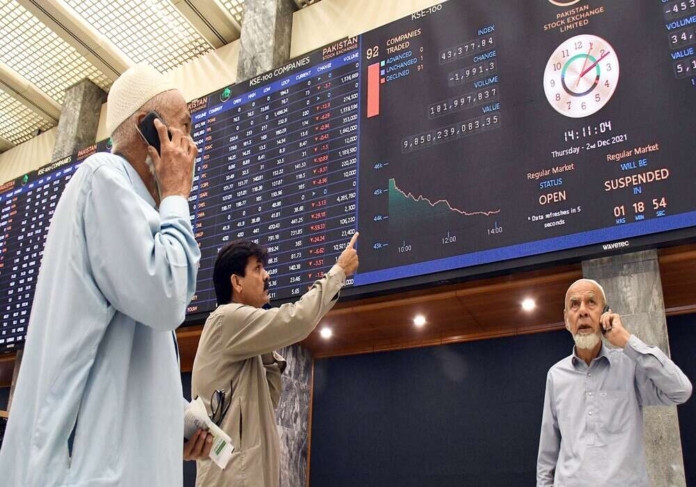 The market began its slide soon after opening at 45,369.14 points, with the benchmark KSE-100 index down 2,005 points, or 4.42 percent, by 1:30pm. As per the PSX Rulebook, if the index goes five percent above or below its last close and stays there for five minutes, trading in all securities is halted for a specified period.

Intermarket Securities’s Head of Equities Raza Jafri cited the widening trade deficit as the reason behind the plunge, saying it would keep the rupee under pressure and lead to ‘aggressive’ increases in the interest rate.

“However, it is important to keep in mind that authorities have already commenced macro-course correction while global commodities are coming down due to Omicron [variant of the Coronavirus]. There may be an element of one-offs in November imports too and coming months may show better numbers,” he added.

The downturn in the market may be treated as an opportunity, he said.

The view was also shared by CEO of Topline Securities Mohammad Sohail who said the ‘shocking’ import bill in November, coupled with the central bank’s ‘aggressive borrowing’ in yesterday’s T-bill auction were behind the nosedive.

Meanwhile, AKY Securities Chief Executive Officer Amin Yousuf noted that stock markets across the world were bearish on the back of countries imposing restrictions to control the spread of the Omicron variant. A similar effect was also seen at the PSX, he added.

Separately, Opposition Leader in the National Assembly and Pakistan Muslim League-Nawaz (PML-N) President Shehbaz Sharif said in a statement that it was not the stock exchange, but the government’s economic policy and the steps it had taken, that had crashed.

Shehbaz held Prime Minister Imran Khan responsible for millions of rupees of investors going down the drain. “We had warned that the trade deficit and increase in interest rates will kill the economy,” he said. He called for putting an end to this ‘destruction’ and said that it was a matter of national security.

A day earlier, the government released provisional data that showed trade deficit rose steeply by 162.4pc in the month of November, driven largely by more than triple increase in imports compared to exports from the country.

The reversing trend in trade deficit was witnessed for the fifth consecutive month as merchandise trade deficit reached $5.107 billion in November against $1.946 billion over the corresponding month last year. This is the highest trade deficit recorded in a single month in terms of value.

Earlier this week, data released by the Pakistan Bureau of Statistics showed inflation edged up to 11.5pc from 9.2pc, the highest increase noted in the past 20 months influenced by a record hike in fuel prices in October.