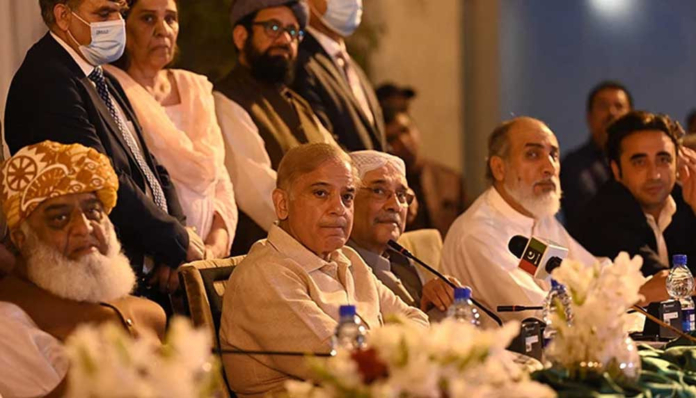 An important meeting of all the parties of the coalition government was held in Islamabad. The meeting was called by Prime Minister Shehbaz Sharif.

The meeting was convened over the important selection of the Chief of Army Staff (COAS).

All party chiefs of the coalition government showed belief in the decision of PM Shehbaz Sharif. The leaders of all parties reiterated that they will stand with the PM over all decisions.

Other important allies of the coalition government and federal ministers of the Pakistan Muslim League Nawaz also participated in the meeting.

Chaudhry Shujaat Hussain addressing PM said that it was his right because he has been chosen for this important responsibility as Prime Minister, Shujaat

Asif Ali Zardari said to the PM that you are the Prime Minister and you have the right to make the decision. He also said that the Constitution has appointed the responsibility to the PM.

Bilawal Bhutto Zardari said that they shall back every decision of the Prime Minister.

Khalid Magsi said that they have full faith in PM’s selection and will stand by his decision.

He also thanked PM for consulting with them.

Qamar Zaman Kaira after the meeting said that the PM had set a good example by consulting with allies.

Speaking to journalists after the meeting he said that the meeting was on one point agenda and important appointments were discussed. He said that they will stand with PM and Asif Zardari had also assured full support.