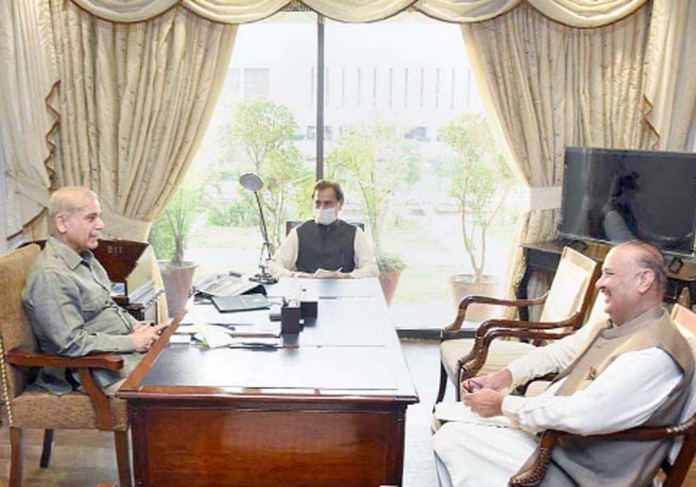 Prime Minister Shehbaz Sharif on Tuesday said that economic self-reliance was the key to achieving the goals of development and prosperity, and the current economic scenario of Pakistan required tactical solutions to address economic problems.

Addressing the ‘Turn Around Conference’, organised by Ministry of Planning Development and Special Initiatives, Shehbaz stressed the need for rising above politics to sort out financial issues confronting the country.

The moot had gathered stakeholders from all walks of life with an objective to finding solutions to the country’s current socioeconomic issues. The premier said Pakistan was facing many external and internal challenges that were compounded by the existing commodity super-cycle and geopolitical situation. He said that as economic growth did not offer enough opportunities for national progress, short-term measures could act as a catalyst for speeding up growth. He said financial self-reliance was the top most priority of the coalition government, and added that focusing on areas of agriculture, agro-based industry and exports was vital for strengthening national economy.

He stressed the need for judicious utilisation of the $2 billion tranche from the International Monetary Fund (IMF) and pledged that every single penny would be spent prudently. He also mentioned the support of China during the tough financial times and helping Pakistan in its journey towards economic stability. Shehbaz said there was no dearth of talent and potential in Pakistan and emphasised setting the right direction to achieve the goals of prosperity.

He pointed out that several vital projects such as Reko Diq were abandoned in the past that damaged the development agenda of the country. He said that many power generation projects were also stopped, which resulted in shortage of electricity, and the situation subsequently impacted industrial growth. He expressed satisfaction that the conference engaged all the relevant stakeholders, which could hold the development sector together from across the nation. He said wider and inclusive consultations of experts belonging to diversified fields could be helpful in providing solutions to come out of this economic quagmire.

Federal Minister for Planning Development and Special Initiatives Professor Ahsan Iqbal said the aim of the conference was to take input as well as understand and resolve hurdles in economic growth in order to put the country’s economy back on track.

He said the government had already taken necessary short-term actions to stabilise the economy and deal with the looming balance of payments crisis. However, he said, the government’s focus was to ferret out medium- to long-term solutions to optimise the country’s economy to tap its full potential in line with Vision 2025.

Speaking on the occasion, Finance Minister Miftah Ismail said the government provided relief to people despite tough circumstances. He said the government imposed direct taxes and also the super tax to help the country become self-reliant. He said the previous government took Rs20,000 billion loan in around four years, which put a heavy burden on the national exchequer. He mentioned that tax had been levied on rich and vowed to also bring traders and shopkeepers into the tax net.

Miftah said the government would take difficult decisions in the future, if needed. He also hinted that he would soon give good news to the nation. He said that if Pakistan was to become self-sufficient, Pakistanis, especially the rich, would have to contribute. Achieving the goal in 10 years would not be difficult if we moved towards economic growth, he said.

“The IMF has merged the seventh and eighth installments. If you have to borrow from other countries, don’t talk about self-sufficiency,” he said. He said the country was not ready for the fifth deficit after four major deficits, as it was facing a monthly deficit of Rs120 billion.

Earlier, the finance minister announced that Pakistan had received the combined economic and financial targets for the seventh and eighth reviews of its IMF bailout programme.

On Twitter, Miftah Ismail said the government had received the lender’s Memorandum of Economic and Financial Policies (MEFP) for both reviews, following meetings last week.

The MEFP is a key step to indicate that the two parties had reached an agreement. The government wanted to conclude an agreement with the international lender for the revival of the $6 billion programme before the approval of the federal budget for the upcoming fiscal year 2022-23, which needed to be done by June 28. Miftah had told the National Assembly that although the country was rife with negative sentiments expressed by many financial quarters, it looked very likely that the restoration of the IMF programme was in the offing. He had said that keeping in view the erratic policies followed by successive governments in respect of managing the economy, almost all international financial institutions had become wary while dealing with Pakistan.