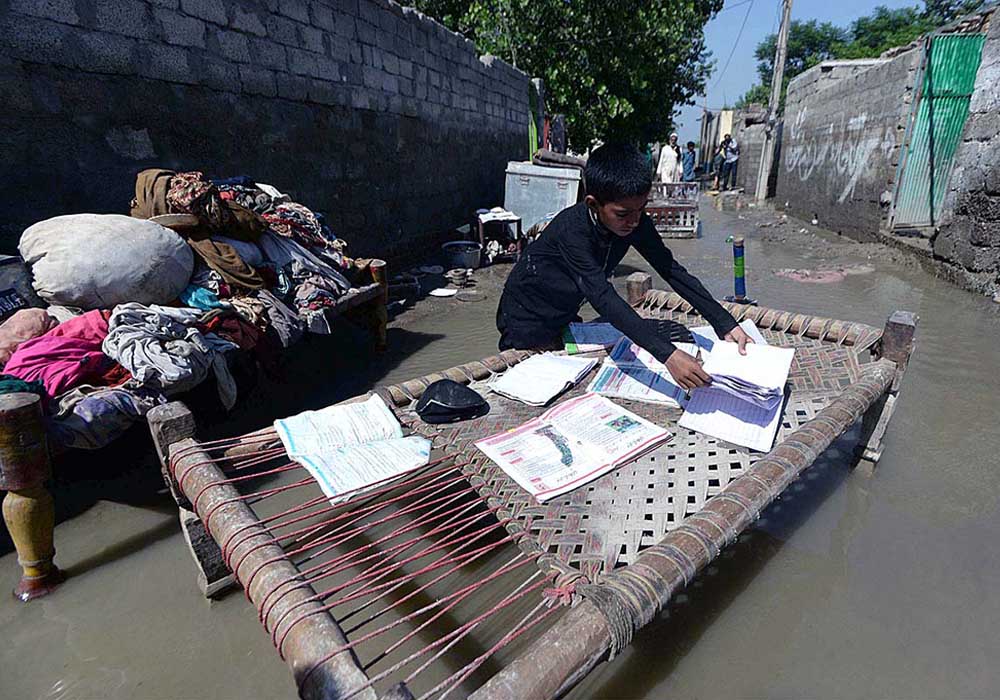 Ravaging floodwater has submerged most villages of Baqapur union council, while hundreds of people in villages stranded in floodwater. According to reports, the flood is now advancing towards Quetta Road, which connects with Balochistan .Reports said that motorway police personnel have been deployed on Indus Highway at Mehar and KN Shah after it was also inundated by floodwater. The police personnel on Tuesday stopped the vehicular traffic towards the flooded towns of Larkana, Qambar, Kandhokot, and other districts of Sindh and Balochistan.

It must be mentioned here that Quetta-Sukkur road has been closed for the last five days. Hundreds of vehicles have been stranded at Naari Bridge after Bibi Nani and Pinjrapur bridges washed away by floodwater. Meanwhile, warnings have been issued to many localities of Khairpur Nathan Shah, Mehar and Juhi towns and villages of Dadu districts.

Meanwhile, two children drowned in floodwater near motorway in Charsadda on Tuesday. Rescue 1122 said that an eight-year old boy and his sister, aged 11, were playing in floodwater when they drowned. The ill-fated family of the children was living in a relief camp established for the flood victims. It belongs to Shabara village of Charsadda. The Rescue 1122 teams have recovered both bodies and handed them over to the heirs.

Venomous snakes, agitated by the floodwaters, were on the prowl in affected areas. In Nowshera district of Khyber Pakhtunkhwa 134 cases of snake bites have been reported of which one woman died as she did not receive medical aid in time. According to the Health Department, lack of anti-venom was leading to deaths and disabilities among the people of flood-hit areas. It said prior information about the presence of venomous snakes and other insects in floodwater was forwarded to the people in the affected areas but still scores of people have been bitten by the venomous reptiles.

Snakes have become more dangerous and agitated due to hunger and are biting everything that comes in their way. At least eight people were killed and three others injured due to rain and flood-related incidents in Khyber Pakhtunkhwa during the last 24 hours. According to Provincial Disaster Management Authority (PDMA), relief operations are underway in the flood-affected districts and all available resources are being utilized to provide relief to the flood victims. PDMA spokesman said that 116 relief camps have been established for flood victims throughout the province; 77 camps were established in Nowshera district in which 25,000 people are staying. Ffood and other basic facilities are being provided to them; 11 camps have been established in Dera Ismail Khan, housing 25,000 people, while the district administration has established 17 relief camps in Charsadda and seven in Dir Upper, two each in Malakand and Mansehra.

Meanwhile, Pakistan Meteorological Department (PMD) on Tuesday warned of very high flood in River Kabul at Nowshera and River Indus at Taunsa during the next 24 hours, predicting more rain over the catchments of all major rivers. The Flood Forecasting Division (FFD) of PMD said that very high flood is likely to continue in River Kabul at Nowshera during the next 24-hours while River Indus at Taunsa is also likely to attain very high level during. Moreover, it has predicted mainly dry weather over most parts of the country, however, it predicted isolated thunderstorms/rain over the upper catchments of all the major rivers along with northeast Balochistan, southeast Sindh and DG Khan, DI Khan, Rawalpindi, Gujranwala and Lahore Divisions.

After the fresh warning, the National Disaster Management Authority has issued a high alert to all the departments concerned; PDMAs, Irrigation Departments, respective District Administrations/DDMAs and Municipal/City administrations.